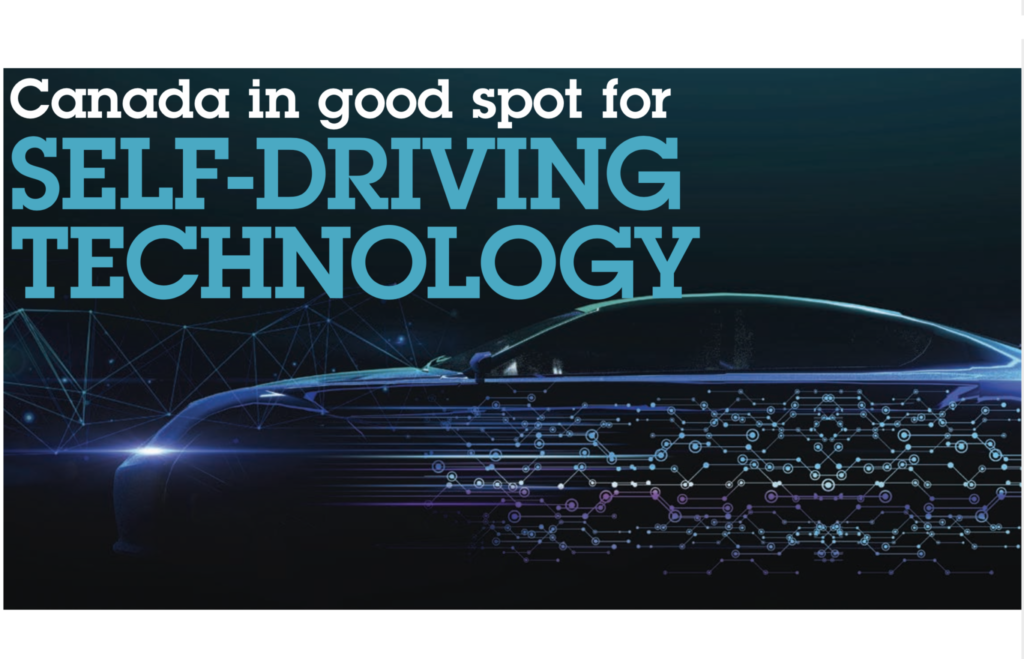 Between industry partner participation and research and development hubs, Canada is in good shape for being among the first countries to see automated vehicles become reality.

And chances are those in Southern Ontario are going to see this technology before the rest of the nation.

The report looked four main pillars: policy and legislation in place, such as automated vehicle legislation and government investments in the technology; how the country does in terms of technology and innovation, such as industry partnerships, research and development; its road and mobile network infrastructure; and consumer acceptance.

The index found Canada rates well on technology and innovation, notching top marks for industry partnerships and government-funded pilot projects. Ontario, for example, is the only jurisdiction in the country that has issued permits for the province’s automated vehicle pilot program. Recently, seven permits were given to the likes of Uber, Continental, Magna and Blackberry’s QNX.

‘Planning today for
an AV future is essential,
because it is not
a question of if but when
AVs becomes ubiquitous.’
—Richard Threlfall, KPMG U.K.

As of Jan. 1, 2019, those companies were given the green light to test driverless cars on public roadways, under strict conditions. Those conditions include having either a passenger in the vehicle or a remote operator monitoring the vehicle. Local authorities will also have to be alerted of any test.

In October 2017, the first street test of a self-driving car in Canada took place in Ottawa. The vehicle – carrying Ottawa Mayor Jim Watson and other officials – was equipped with the QNX operating system. The demonstration took place on a closed street with no traffic or pedestrians, with the exception of people in attendance watching the event.

Stratford, Ont., a picturesque town northwest of London and within the so-called Tech Corridor between Toronto and Waterloo, is home to the Autonomous Vehicle Innovation Network.

Here, the provincial government is providing $80 million over five years to commercialize connected and automated vehicles, encourage innovation and collaboration, develop local talent and build awareness and promote Ontario as a leader in the area. The network houses a demonstration zone for new vehicle technologies to go through testing, be validated and receive live showcasing. It’s operated by the Automotive Parts Manufacturer’s Association.

In KPMG’s index, Canada scored well for its research and development hubs.

“[Ontario] is the fourth largest exporter of vehicles in the world, with manufacturing facilities for GM, Fiat-Chrysler, Ford, Toyota, Honda and their supply chains,” Webster said. “Its Waterloo-Toronto Innovation Corridor includes research universities and technology companies, convincing Uber and General Motors to move jobs there.”

Countries most ready for automated vehicles

According to KPMG’s Autonomous
Vehicles Readiness Index,
the 10 countries most prepared
for the future of autonomous
transportation of those
researched are:

In terms of road infrastructure and mobile network service, Canada did well in these areas. KPMG noted that the major telecom companies are successfully testing 5G network technology – something that is viewed as necessary to facilitate connected and automated vehicles.

Much like the recent report from the Canadian Senate, KPMG advises governments and private-sector players to plan for an automated future right away.

“Planning today for an AV future is essential, because it is not a question of if, but when, AVs becomes ubiquitous,” said Richard Threlfall, partner and global head of infrastructure at KPMG U.K. “Embracing partnerships between government and the private sector can speed technology development while helping ensure that application of AV meets public policy objectives.”

Engagement for planning between government, businesses and citizens is critical, he added.

“It’s not just about transportation; we need to be prepared for the impact of AVs on all aspects of life in the future,” Threlfall said.

So why did Canada finish seventh? if there are so many good signs pointing towards an automated future, shouldn’t it have ranked higher?

Perhaps, but other countries were just a bit better at the same things for which the index praises Canada.

The Netherlands was “the clear leader” in KPMG’s report. The index ranked its road network as one of best in the world, fourth in technology and innovation, third for policy and legislation and second for consumer acceptance, trailing only Singapore in that regard.

What helped it score so highly was its electric vehicle charging station infrastructure. The index noted that the nation has 19 stations per 100 km of road – by comparison, China and the United Kingdom are the only countries with more than three over the same distance.

The United States, which ranked third, is a world leader in automated vehicle innovation readiness. More than 160 companies have their headquarters in the U.S. – Germany is a distant second at 22. What’s holding the country back is the lack of national standards, the index said.

KPMG highlighted that the Big 3 automakers in Detroit are involved on the research end, along with ridesharing companies Uber and Lyft. Even a non-U.S.-based automaker like Toyota is housing a billion-dollar research facility in Michigan.

Confusion, however, clouds the American people. The report notes that people are aware of automated vehicle testing but there is little understanding of what these vehicles are capable of and when these will be adopted. Despite being a country that generally sees good consumer acceptance, there are low levels of acceptance of self-driving technology. Charging stations that are few and far between and poor road quality also bring its score down.

Overall, the report said that governments across the world seem willing to regulate and manage automated vehicle development, and have excellent roads, a strong mobile network infrastructure and private sector investment and innovation.