Canadian tipping point for EV adoption: gas at $2.45 a liter 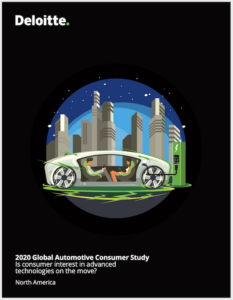 A new report from Deloitte suggests more than 50% of Canadians will embrace electric vehicles if gasoline prices rise above $2.45 a liter.

The North American edition of its Global Automotive Consumer Study offers a wealth of insights about Canadian, Mexican, and U.S. motorists.

The report examines motorists views about electric vehicles, as well as autonomous vehicles, the use of vehicle data, road safety, and driving habits.

The study found that 68% of Canadians are unwilling to pay more than $500 extra for a vehicle with advanced safety features.

For connectivity features, 74% are unwilling to pay more than $500.

For infotainment features, 83% are unwilling to pay more than $500

And for alternative engine solutions, 53% are unwilling to pay more than $500

However, there is some evidence to suggest that consumers’ willingness to pay at least something for advanced technologies has improved over the last few years. For example, in 2017, 53% of consumers were unwilling to pay any more for autonomous technologies. That number dropped to 37% by 2020.

Consumer opinion around the world also differs on specific concerns around connectivity, including the security of biometric data generated and shared by connected vehicles. While security is a concern for 58% of Canadians and 59% of Americans, only 40% of Chinese motorists cite the same concern.

Although consumer perception regarding the safety of self-driving vehicles varies by country, overall sentiment remains relatively flat on a year-over-year basis. In Canada, the percentage of consumers who agree that autonomous vehicles will not be safe has hovered around 44% for the past three years.