Wade Hein considers himself a ‘detailer for the underside of the vehicle.’ 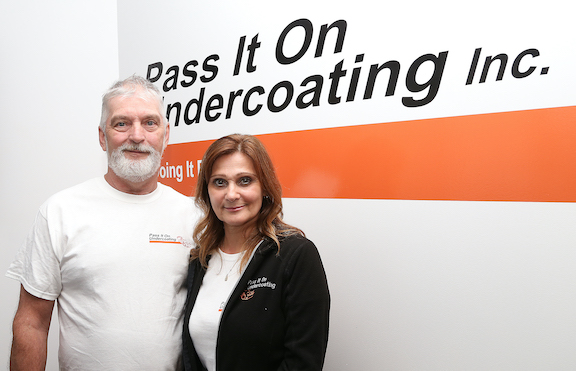 Wade Hein used to wear a light on his miner’s helmet when he worked underground in the nickel mines of Sudbury, Ont.

Now he works under cars… and  he still wears a light to help him see into the dark crevices that can corrode unprotected metal.

“Yeah, I still wear the light,” he says with a laugh. “That comes from years of being a miner!”

The Sudbury, Ont., entrepreneur has been busy since retiring from the mines.

While restoring an old truck, he learned about the value of spraying the undercarriage with a powerful and yet natural coating. Fluid Film was the perfect product, and he has built a business around offering the undercoating service to his neighbors.

The great success of his fledgling business has convinced him to go national, with a business-in-a-box called Pass It On Undercoating Inc. He says it’s the perfect stand-alone business for shop owners looking to expand into a new area of servicing client vehicles.

He says Pass It On Undercoating Inc. is designed as a stand-alone service, and would complement existing repair businesses that have available facilities nearby or unused capacity in their shops.

Hein has treated thousands of cars in his hometown, and over the past several years has developed the tools, marketing materials, and a business model that he says would work for others.

The key ingredient in the operation is Fluid Film, a 77-year-old unique lanolin-based lubricant and corrosion prevention that can be applied year-round and offers lubrication and protection for exposed metal, chrome, aluminium, and brass.

He says it won’t harm paint finishes as it protects surfaces from salt, calcium, chloride and other chemicals. It is also non-conductive, so safe for use around sensitive electronics and sensors.

A kit of special wands and tools ensures easy application in about an hour without drilling any holes, and a suite of marketing materials will help build repeat and referral business.

“This is undercoating in an eco-friendlier way,” he says. “I think of it as using an old product in a new way.”

It is biodegradable, so it doesn’t require onerous disposal procedures. Developed in 1943 to protect water ballast tanks for the ships, it has since been used in a great number of industries, from agriculture, to aviation, to small motors. It has even been put to use in space by NASA.

In large quantities it is painted on, but Hein has developed a series of tools to use compressed air to spray it under vehicles. He has created a number of wands for different jobs, using Lemmer spray equipment.

Dripless, it can be applied year round, giving metal a shiny orange-peel affect.

His “business in a box” is a licensing package that includes the spray guns, wands, compressors, front-desk marketing  materials, and two barrels of Fluid Film. It also comes with his own expertise and marketing efforts.