Brian Easthope of Stoney Trail Mazda is this year’s winner of the Canadian MazTech Service Skills Competition in Toronto. 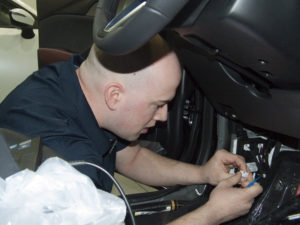 Mazda’s top technician says win, lose or draw, the thrill of competition sure beats the routine of daily work in the bay.

Brian Easthope won the top spot at the company’s annual MazTech Service Skills Competition in Canada, outscoring nine other technicians from across the country.

“Working in this trade on a daily basis, the bulk of what you do is fairly thankless,” he says. “Something like this is a breath of fresh air. You get a chance to excel and shine, and everyone sees you at your best.”

Despite the stress of racing the clock to repair a bugged vehicle under the scrutiny of friends, family, and coworkers, Easthope says the competition offers its own reward: the chance to realize your potential as a technician.

“It makes you feel really special,” he says. “A lot of guys search for that feeling in this trade. They don’t want to just turn wrenches all day. They want to show that they can do more than just oil changes and brake jobs.”

He was joined on the podium by Dany St-Pierre of Quebec’s Mazda de Sherbrooke (second place) and Adam Bochek of Ontario’s Mazda of Hamilton (third place).

Christian Maheux of Sittelle Mazda in Saint-George, Que.; and

“You are truly the best of the best,” he told them. “We’re here to see who’s the top of the top.” 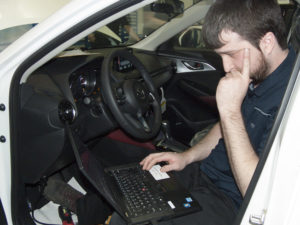 Competitors had to find and resolve seven customer complaints on a 2018 Mazda CX-3. According to the work order they were all presented with at the start of the competition, the bugs included:

1) Engine will not crank over;

2) Engine cranks but will not start;

3) Engine has lack of power. Check Engine Light is on;

5) Door does not unlock with door handle request buttons;

6) Reverse lights not operating; and

7) ADD does not display correctly. 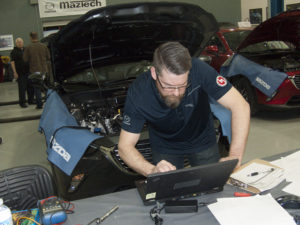 In addition to those complaints, there were also three unrecorded complaints: a missing taillight, loose emergency brake lever, and a non-functioning wiper.

“I found one of the bonus bugs,” says Easthope, “but I didn’t have time to replace the bulb.”

He entered the trade as an apprentice in 2009 and was licensed in 2013. He says nearly a decade of working at the dealership has made him pretty comfortable on Mazdas. And, like many technicians, he enjoys the challenge of trouble-shooting.

“Problems that are difficult to solve are what I look for,” he says. “When something unusual comes in the bay, all of us will stick our head in and take a look, no matter who’s stall it’s in. We kind of work together on it.”

It is in keeping with his personal philosophy of continuous learning.

“I’ve always had the attitude that I’m not done learning until the day I die,” he says. “When I started growing with Mazda, I just wanted to learn more and more and more.”

This year’s competitors all went home with a Google Home device, and an oscilloscope module for their computers.

The top three finishers also earned a cash prize. And Easthope gets the opportunity to represent Canada at Mazda’s International MazTech competition in Japan next spring.

He’ll work as a team with last year’s winner, Marcin Malocha, at the world event held every two years at Mazda’s international headquarters.

The 2017 Canadian team consisted of Yannick Nadon of Elite Mazda in Gatineau, Que., and Reynold Bergen of Gerry Gordon’s Mazda in Winnipeg, Man. They’ll proudly tell you that they ended up in fourth spot – although they’ll have to add that only the top three finishers are announced, and every other team is tied for fourth.

“This is a really great event for Mazda,” says Craig McQueen, a service training instructor for Mazda Canada and one of the organizers of the Canadian national event.

He says competition not only offers the company a great way to recognize technician talent and celebrate their skills, but it also cements their loyalty to Mazda and gives them something to strive toward.

“Any technician that comes to this competition gets fired up by it,” he says. “They end up trying really hard to come back next year.”

Certainly that was the case with Easthope, who competed for the first time last year.

“Going to the competition was such a great experience that when the qualification exam came out for this year’s competition, I did it right away,” says Easthope. “I really wanted to go back again.”

Many of the repeat competitors say they have come to appreciate being part of a network of top diagnosticians. They turn to each other when faced with a difficult problem in the bay.

According to the official MazTech rules, Easthope won’t be elible to compete next year, but if he’s invited to watch or help adjudicate, he says he’d love to go.

Check out our gallery of photographs below.