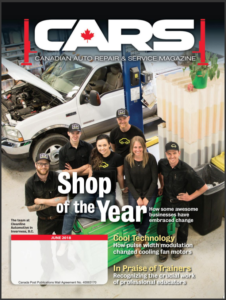 Nominations are now open for the CARS Shop of the Year for 2019.

This annual award is meant as a way to recognize Canadian auto repair and service facilities that have made a significant change to their business or reached a significant milestone in the last 12 months.

* One passed from one generation to the next last year (Henry’s Autopro, Antigonish, N.S.).

* And the owner of one not only earned top spot in a local readership poll, but also won the chamber of commerce Young Professional of the Year award (Alain Murray of Murray OK Tire, Kapuskasing, Ont.)

* The Shop of the Year award went to Cleanline Automotive in Invermere, B.C. for a raft of innovations that included an ambitious new social media strategy, new staff, expanded facilities, new CRM software, and a prominent role in local social justice efforts. All in the previous 12 months!

Do you know a shop that has stepped up its game in the last year?

We’re looking for stories that will serve as an inspiration to the entire industry.We’d like to feature them in our July 2019 issue when we celebrate shop innovations and name the Shop of the Year.

Again, our emphasis is on innovations within the last year, so tell us what’s new!

This is a peer-to-peer award. We will only accept nominations from people within in the industry. We want to hear from shop owners and employees, their family members, and their parts suppliers.

And while we love your enthusiasm, please submit only ONE nomination per shop. It is only the first step in the process. Prospective winners will be interviewed by phone to determine their eligibility for the award.

You can find the official nomination form at www.autoserviceworld.com/awards/shop-of-the-year. We can’t wait to hear from you!