Toronto diagnostician is our Canadian Technician of the Year

Rui Silvestre, part owner of Master Mechanic High Park, excels in the bay and behind the counter.

At the Top of his Game! 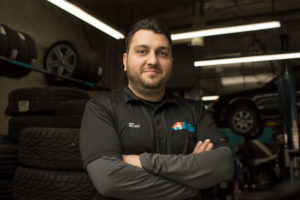 Rui Silvestre, Technician of the Year 2017. Photo by Kevin Sarasom

The talented diagnostician earned the title of Canadian Technician of the Year for his skill as a technician, his dedication to continuous learning, and the kind of exceptional customer service that has propelled his shop to become a leader in the 39-store Master Mechanic franchise.

Rui was chosen from a field of candidates from across the country. The award, sponsored by Snap-on Tools of Canada and Total Canada, seeks to recognize a skilled technician who is a leader in the shop, the industry and the community.

“This is really awesome,” he said when he learned of the award. “It’s a real honor!”

A framed certificate and a brand new Snap-on toolbox were presented to him last month, at a shop ceremony that featured a ‘wall of doughnuts’ and an elaborate fondant cake depicting Rui at work in the bay. 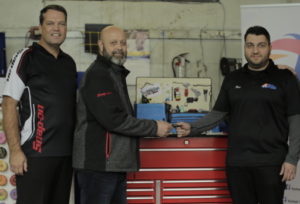 From left, Ray Lavender and Nick Del Vasto of Snap-on Tools of Canada, hand over the key to a brand new Snap-on toolbox. Snap-on has been the premium sponsor of Canadian Technician of the Year since its inception in 2004. Photo by Kevin Sarasom

“Snap-on is pleased to celebrate the successes of great technicians like Rui,” said Ray Lavender, marketing communications manager for the tool and equipment company that has sponsored the award since its inception in 2004. “They are the future of this industry, and it is their hard work and dedication to excellence that we really need to promote and reward.”

Nick Del Vasto, a long-time Snap-on franchisee who has worked Toronto’s downtown for decades, said Rui is a great choice for Canadian Technician of the Year.

“He cares all the way around. He cares about the customer and the job. He’s the real deal,” he said. “And he’s a good customer, too. He keeps on top of what’s new, and is eager to learn about new technology as soon as it is out. He’s always improving and evolving.”

In fact, it was Del Vasto who was instrumental in helping Rui find the job with shop, owned by Josie Candito, about 10 years ago. 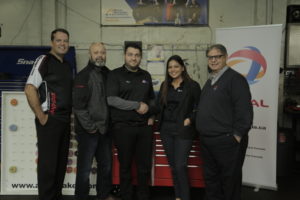 Rui Silvestre (centre) is flanked by sponsors of the Canadian Technician of the Year Award. From left, Ray Lavender and Nick Del Vasto of Snap-on Tools of Canada. To the right of him, Pragati Upadhyay and Bart Chimienti, territory managers for Total Canada Inc. Photo by Kevin Sarasom

“He was pushing a broom, as an apprentice at another shop roughly 10 years ago. He told me he was looking for something else, and I introduced him to Josie,” he said. “I think it is pretty clear it has worked out very well for both of them.”

Josie said he brought a lot to the shop when he joined.

“We changed a lot because of him,” she said. “He brought a lot of new ideas. He knew what kind of equipment we needed, what kind of training, what kind of talent development, inspection standards… on and on. From the start, he put his whole heart into this job.”

His dedication paid off. Last year, she made him a partner in the business. He now works part of his day behind the counter, dealing directly with clients. When he’s needed in the back, he tackles some of the toughest that come through the doors.

Josie said she cried when she learned that he’d won because she knew he was so deserving.

Bart Chiamenti, a territory manager for award sponsor Total Canada, said the oil company is proud to be associated with the kind of excellence that Rui represents.

“We need more great people like him,” he said. “He’s a credit to the industry.”

Keeping up with changes in the industry has always been a top priority for Rui.

“In this industry, change is constant,” he said. “That’s why training is so important. We tend not to see cars until there about three years old but when we do, we have to know how to fix them.” 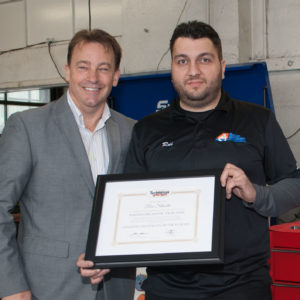 Allan Janssen, editor of CARS magazine, presents Rui with the Canadian Technician of the Year certificate.

To fill the gaps in his knowledge, he does a lot of reading after hours, browsing the Internet and immersing himself in journals. These days he spends as much time at the counter dealing with clients as he does in the bay diagnosing electrical problems.

For our latest Canadian Technician of the Year, it’s a great mix that keeps every day interesting.

“My end game was always to be part of a good shop or have my own,” he said. “And this is the best of both worlds. I consider the shop my own. I mean, it’s Josie’s, but she’s brought me in. To me this is home. It’s where I’ve been for 10 years and I can’t see myself being anywhere else.”

Out of a strong field of candidates, the Canadian Technician of the Year judges singled out four other nominations for special mention. 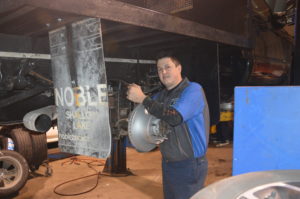 Jeffrey comes by his trade honestly. His grandfather and his father were both techs. His best advice to young technicians is to seek the best training they can find. “This is an ever-changing job. You’ll always be learning and training, if that’s not for you, you’re in the wrong business!” 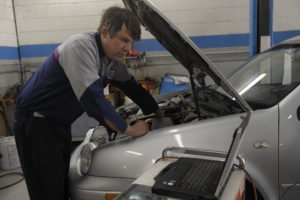 Corey is described as methodical, mentally prepared for anything, and always ready for training. Licensed since 1994, his approach to customer service can be summed up in a single word. “It all boils down to trust,” he says. “In this business, honesty is the only way to go.” 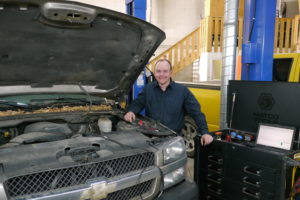 A volunteer firefighter, Ken has been licensed for about 18 years. He leads by example, has a positive attitude at work, and is always willing to help others in the shop. He’s also a big believer in training. “I never took a course where I didn’t learn something,” he says. 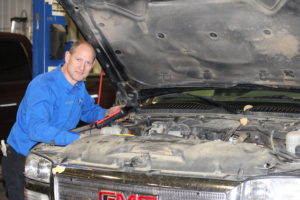 Dwayne got into the trade at age 16 doing odd jobs around a gas station. Now 40 years old, he’s a gifted technician who enjoys the complicated jobs that frighten others away. He’s equally happy working ‘on’ the business as ‘in’ it, having sought extensive business training over the years.