Speak up, but know when to pause 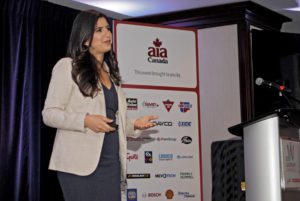 Fotini Iconomopoulos took to the stage of the 2018 Women’s Leadership Conference, co-hosted by the Automotive Industries Association of Canada and U.S.-based Women in Auto Care to open up the second and final day of the event.

A strategy and negotiating expert, she told the audience about how women are always negotiating – at home with their kids, with their spouse, in traffic, on public transit – but when it comes times to do so at work, they tend to shy away.

“You’re trying to get what you want all the time,” she said, later asking women to think about what they’re giving up when they decide to not negotiate.

She showed an example of how just 7 per cent of women negotiate their salary when starting a new job, compared to 57 per cent of men. Negotiating for more money could mean retiring eight years sooner, Iconomopoulos said.

“It’s that ability to shut up – not just verbally, but the ability to quiet your mind.”

Overcoming any fears around negotiation is the first step.

The most important tactic anyone – man or woman – can use in a negotiation is to pause, Iconomopoulos said.

“It’s that ability to shut up – not just verbally, but the ability to quiet your mind,” she said.

When we’re in the midst of intense talks, the human brain goes into overdrive. When that happens, the ability to think rationally disappears. 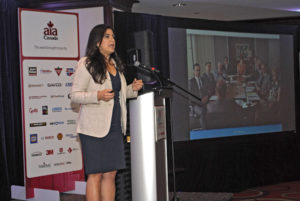 “If you can find a way to press this mental ‘pause’ button, you give yourself some mental runway to be able to bring rational thought back in and make better decisions and to speak diplomatically and to speak in a confident way and to be empowered in everything that you do,” Iconomopoulos said.

She also advised women to avoid mimicking the Kim Kardashians of the world where they use weak or annoyed voices, or end every sentence as if they were asking a question. Iconomopoulos called this the “reality TV epidemic.” That type of tone in your voice shreds credibility. Instead, be firm and authoritative.

“Be careful adopting habits that are going to hurt your credibility,” she said.

Words like “sorry” and “just” do the same. Unless you did something wrong that you need to apologize for, there’s no need to say sorry before asking a question on that you were “just” following up.

“You don’t need to justify yourself and you don’t need to apologize for yourself,” she said. “Think about what you can edit out of your vocabulary very easily just by pressing the ‘pause’ button before you hit send.”