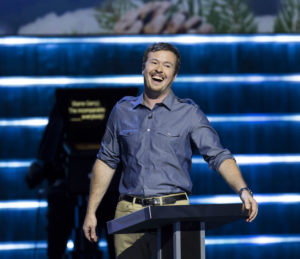 Brittain Bancroft, a technician at Accurate Steering and Tire in Minto, N.B., is competing for the title of Canada’s Smartest Person.

An automotive technician from Minto, N.B. says he drew on skills he learned in the repair bay when he competed for the title of Canada’s smartest person.

Britt Bancroft, a tech at Accurate Steering & Tire Ltd., was a contestant on the CBC reality show Canada’s Smartest Person this summer. The winner will be announced on the season finale Sunday at 8 p.m.

“It’s a little surreal right now,” the self-confessed introvert says of all the attention he’s been getting lately. “I’m a pretty quiet guy, so this is something I’ve had to get used to. But it’s also been a lot of fun.”

“Music is probably my weak spot but, as a technician, I find that I use all the other areas on a day-to-day basis,” says Britt. “I think I’m pretty well-rounded, so I thought I had a half decent chance of winning.”
He also figured the show would give him a chance to get out of his comfort zone… and he wasn’t wrong. Among the pressures he faced was a live studio audience, complicated puzzles, and tight time constraints.

“Once I was there and doing the challenges, I managed to block out everything but the problem that I had to solve.”

Fortunately, one of the challenges played to his strengths. He was asked to put a series of gears in the right place to make a machine work. In the moments before the competition began, he managed to figure out the proper placement of two of the gears, giving him an immediate head start when the clock started. 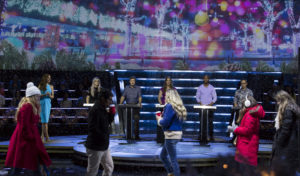 “I’ve always enjoyed problem solving,” he says. “Whether it’s a word problem, or a math problem, or a physical problem around the house. I always want to figure things out. And, of course, fixing cars is all about trying to solve problems. I solve problems all day every day.”

Britt won a spot in the series finale by beating all of his competitors that day: a neuroscientist, a lawyer, a personal trainer, a university professor, and a law student. Since his episode aired on Dec. 4, locals have been streaming into the shop to congratulate him.

Britt says his boss, Terry Hunziker, owner of Accurate Steering & Tire Ltd. was really good about giving him the time off to travel to Toronto for the show.

“When I told him about it, Terry agreed this was a once-in-a-lifetime opportunity and he said he’d get by without me.”

In fact, Terry seems to be enjoying the attention his shop has been getting and he’s proud of his employee. He says Britt was a great addition to his staff earlier this year.

“I know his family. They’ve been customers of mine for years. My kids went to school with him and his brothers, who are all really smart,” he says. “When I lost one of my techs and a job opportunity opened up, Britt found out really fast and was on the phone with me to join the team.”

Hunziker says he likes to work with academic types.

“You don’t have to be a car guy to be a good technician,” he says. “When I’m looking to hire someone, I tend to pick guys who come from academic courses in school, as opposed to shop courses. It’s because of the way they think and the way they approach problems.”

Britt studied criminology and philosophy at St. Thomas University in Fredericton, N.B., with an eye to getting into the corrections field. Ultimately, though, he followed other interests.

“I couldn’t afford to have a washer pump replaced on my car so I took a crack at it myself. It took me forever, but I managed it, and it was actually kind of fun. So I thought I should try doing this for a living. One thing led to another and here I am.”

He hasn’t regretted the decision for a minute.

“I have fun every day,” he says. “Everyone has challenging days, but I love my job. I love going to work and solving problems and meeting people. I get paid to get dirty, and that’s fine with me.”