An important role during exciting times

New AIA chairman sees plenty of opportunity ahead, but finding talent to fill tomorrow's jobs is a priority 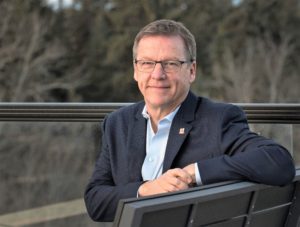 Brent Hesje, chairman of the Automotive Industries Association of Canada.

The Automotive Industries Association of Canada has been diligently planting the seeds of being a reliable, trustworthy and relevant voice over the years to an industry worth $21 billion. And the way Brent Hesje sees it, it’s time to flex those muscles as change is afoot.

Exciting times are indeed ahead, said the chairman of the AIA, and with the oncoming wave of changing vehicle offerings and technology, competition is going to be swift as to who will get consumers’ hard-earned dollars.

The Edmonton-based chief executive officer of Fountain Tire looks forward to the next year of being an opportunity to push the value and quality service that the aftermarket offers. There is a wealth of unrealized potential out there, he said, and if the aftermarket can capture it and do it right, customer loyalty can be built ahead of a time when dealers will be pushing across messages that they should be consumers’ top option for service as vehicles grow in sophistication.

That unrealized potential lies in the amount of maintenance and repair work outlined in owner manuals that consumers are ignoring.

“If that was all fulfilled in Canada, there is a multi-billion-dollar prize out there,” he said. “I’ve been in the industry a long time now, 25 years, and in lots of ways I’ve never been more excited.”

Hesje noted that the AIA estimates that prize would be as much as $15 billion, a number that even surprised him after he became involved with the AIA.

“I think what’s so exciting about that is this doesn’t mean us and our competitors need to be in a win-lose situation. We have this bigger prize to go after,” he said. “By having conversations with one another about how we can continually up our game, up our talents and up our professional image, that will only lead to [success].”

Read more about what AIA chairman Brent Hesje thinks can be done to draw in consumers, and the challenges that will come with enhanced vehicle technology in the April issue of Jobber News.


If it all works out, customers – and more of them – will come through the doors of repair and service shops with greater frequency across the country, creating an opportunity to build key relationships.

“It’s a business where if you take care of the customer for the long haul and do the right thing, you really can have a lot of customer loyalty,” Hesje said.

There will also be ripple effects if the industry can encourage more vehicle owners to pay attention to their owner’s manual.

“What’s so good about that is, the better we are at that, the safer the roads are as a vehicle is more up to snuff,” Hesje said. “It’s a pro-active move to keep minimizing the carbon footprint of vehicles if they’re up to snuff maintenance wise.”

Not to mention the jobs it could create, he added. Put it all together – environmental benefits, more opportunities to engage with customers, greater profits, better positioning for the future, job creation – this pursuit looks like a clear winner to Hesje.

“To pull it off,” he said, “we all have to really get looking at the prize out there – underperformed maintenance. That engages the suppliers, the jobbers, the wholesalers, the retailers, the citizens of Canada through the government about the upside of that.”

It’s important to remember that it’s not the aftermarket coming off the sidelines to tell consumers what they should be doing. This unrealized potential is all outlined as necessary work by vehicle manufacturers, Hesje said. 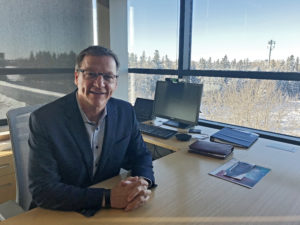 AIA chairman Brent Hesje in his office at Fountain Tire in Edmonton.

So how will the aftermarket get drivers to bring their vehicles in for that maintenance procedure they’ve been putting off? That’s where the AIA can flex its muscle of being a well established, trusted and credible organization.

“AIA has done a wonderful job of positioning itself to be a national voice,” Hesje said, highlighting the group’s 75th anniversary last year, topped off with a weekend gala attended by the hundreds during Grey Cup weekend in Ottawa in November, as a display of the body’s strength.

“Just think about how adaptable that organization has been,” he said. “It has this credibility. It has the federal government wondering what the AIA has to say.”

“All the different stakeholders, they don’t seem to be scared to spend money on education. They’re always looking at how do they get the best talent,” Hesje said.

“Storytelling is so effective. I’ve met so many young people in AIA who are so excited about their careers in the automotive aftermarket when they start telling their stories. You have to be pro-active in actively recruiting,” he said. “With [Fountain Tire], we have stories of how owning 50 per cent of one of our businesses can lead to a very rewarding and very profitable business you can be proud of. I think there are lots of other models like ours. There are lots of franchise oars in our business. The entrepreneurial spirit can really thrive in our sector.”

The same effect can be had on the corporate side. Someone with a passion for sales or marketing can find a number of different companies who can provide them with the room to grow, Hesje said.

“We have this national opportunity to engage with, say, organizations like Polytechnics Canada [an association of colleges and institutes of technology],” he added. “So that’s how you can start to scale out some of the ideas of how you get people involved in the business.”

The type of technology coming down the pipe is exciting, but the challenge will be to draw talent away from Silicon Valley and into the aftermarket.

“If you really want to learn a lot about the automotive sector now, you go to computer shows and technology shows like CES in Las Vegas,” Hesje said. “So that’s got to be an opportunity to attract youth into our industry because I think there is a great confidence that upcoming generations have a comfortableness in technology. So now the industry starts to go to where the young interest is, rather than having trade shows and waiting for them to come that way.”