The bar has been raised in the Edmonton market, says Bob Greenwood, president and CEO of the Automotive Aftermarket E-Learning Centre.

Tirecraft Auto & Exhaust in Edmonton, Alta., has earned the top award handed out each year by the Automotive Aftermarket E-Learning Centre (AAEC).

The shop, owned by Keith Burrill and James Brewer, saw the greatest improvement in 2015 among shops that are part of AAEC’s Business Evaluation Support and Training (BEST) program. As a result, it received the “Best of the B.E.S.T.” award.

The award was presented to Burrill and Brewer and the entire Tirecraft team during a surprise visit on May 11 by AAEC president and CEO Bob Greenwood.

“We’re very excited to have this recognition,” said Burrill. “It took us totally by surprise!” 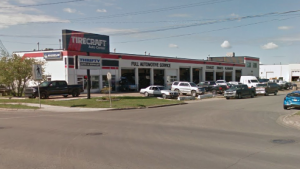 He said receiving the award is confirmation that they’re on the right track.

“We will continue to push forward and change the automotive industry one client and vehicle at a time,” Brewer said. “This is an honor.”

“That’s not easy to do but Keith and James, along with their entire team, believed in the accountability to make it happen,” he said, “and they persevered through many obstacles to get it in place.”

Greenwood said he believes the company is poised for solid growth in 2016 and 2017.

“We’re very confident that this particular Tirecraft store will make a difference in the Edmonton marketplace,” he said. “The bar has been raised.”