As he exits, Marc Brazeau reflects and looks ahead 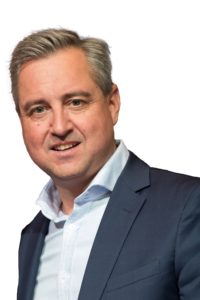 Technology changes, labour challenges and battles centred around CASIS – all are big tests facing the automotive aftermarket in the coming years. And it won’t be easy, says Marc Brazeau.

A prominent leader in the automotive aftermarket, he has spent nearly a quarter-century in the industry. The way he sees it, many of the challenges facing the market today are similar to what was happening way back when he first entered the business.

“If I look at the evolution of the aftermarket over the last 25 years, one thing stands out: the challenges of today are not very different from those of the past years, especially with regard to technologies. The people and businesses that were part of the aftermarket were also experiencing technological change,” he says.

“Cars have evolved over the years: technology has always evolved. And throughout the last 25 years, there has been an acceleration of technological change. I would say that we have not seen anything yet because today we are really experiencing this acceleration in all facets of the automobile.”

By transforming itself over the years into a global industry, the aftermarket sector has also seen growth in opportunities and, at the same time, competition. 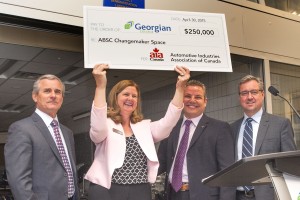 Georgian College president and CEO MaryLynn West-Moynes accepts a donation of $250,000 from AIA Canada in April 2015 for a changemaker space for students. At right, Marc Brazeau, who was AIA president at the time, along with then-AIA chairman Tony Canade and Randy Moore, then-president and CEO of Mr. Transmission

According to Brazeau, “the quality of parts and service, as well as training, are becoming very important, particularly training in the bodywork sector, which has evolved considerably over the past 15 years, because of the safety aspects in the industry and new materials used in cars.”

As well, while the attraction and retention of labour has long been a concern in the industry, it is now, as in many other sectors of the economy, a critical point.

“We’ve been talking for a number of years about the labour shortage. But at the present time, it hits and it will hit hard in the 24 to 36 months,” Brazeau says. “We will see the results of all the efforts, programs and strategies that have been put in place, whether by the AIA or companies. It is important that the aftermarket finds ways to attract young people. Succession plans must be made. And technology will require new skills.”

Much of his career has been with AIA Canada, which, under his presidency from 2008 to 2015, had made a number of achievements.

It’s not so much about any particular project or event that Brazeau is proud of, but more so about the support he has been able to get from the industry.

“My greatest pride is that when I left the presidency, we had a united association from coast to coast, with the extraordinary involvement of many industry stakeholders, including the CEOs of companies,” he says. “It was also about having been able to create a culture where people left their competitor’s hat at the door when we walked into a room to discuss aftermarket market issues and worked together for the good of the industry.”

“It is important that the aftermarket finds ways to attract young people. Succession plans must be made. And technology will require new skills.”

It is this culture, according to Brazeau, that led to the success of the Canadian Automotive Service Information Standard agreement, the “Be Car Care Aware” program, and the I-CAR bodywork training program.

“People saw that the association was well positioned to bring these projects to fruition. But before we get there, we had to have the trust and involvement of all our members,” he says.

Regarding CASIS, Brazeau admits that the battle persists regarding access to information for repair shops.

“The challenge we had from the first minute, the first hour, the first day of the deal, is how to apply it to have a real impact on the repair shops. Yes, we had signed an agreement with the leaders of the manufacturing companies, but a bigger challenge was still awaiting: how to translate an agreement with legal language into something that, when the consumer comes to the shop, the technician and the owner can use to repair the car in the desired way. This gap between the language of an agreement and the reality of technicians in shops still exists today.”

To this end, Brazeau hopes that having the direct involvement of repair shops with the AIA leads to the daily realities of a shop being reflected in the application of the agreement.

Although he is leaving the aftermarket, Brazeau still remains in the transportation industry and in a sector that is just as sensitive to the economy.

“Trains carry 70 to 80 percent of all goods in Canada. The automotive and auto parts sector is part of this clientele. And there are links to be made between the two. One of those links is that people have to go from point A to point B. If it’s not by car, they do it by rails,” he says. “Every day, trains carry thousands of passengers from their homes to their offices. Just as cars, the railways are something that touches us all on a daily basis.”

His previous responsibilities as president of a pan-Canadian association have well positioned this experienced administrator for his new role, allowing him to acquire a clear vision of what makes an association successful.

“This gap between the language of an agreement and the reality of technicians in shops still exists today.”

“Every successful association has three things that set it apart: first, to ensure added value for members, to have a purpose that is very real. Second, to have the support of members. There must be participation, commitment and interest at the highest level. It is important for an association to be attentive and to be well involved with its community. Third, to support communication with all stakeholders: the media, governments and all interested parties,” Brazeau says. “These three things are the secret sauce of the success of any association. If they are in place, the association will be very profitable.”

Even though they have one thing in common – transportation – the AIA and the Railway Association are different in many ways, he adds.

“AIA is an association with five key priorities in its business plan: training, industry image, market research, government relations and event organization. The Railway Association of Canada is even more focused on government relations and training. These two aspects touch the most important point for all railways: safety – passenger safety, the safety of goods and also that of the population,” Brazeau says.

An event like the rail disaster in Lac-Mégantic five years ago, “was a turning point and made rail safety the No. 1 priority for all stakeholders, be it employers, employees, governments and communities,” he adds. “I am really going to spend my time and experience making sure that the Railway Association of Canada continues to be at the forefront when it comes to rail safety.”