APD Calgary’s Barry Murray is Counterperson of the Year

‘It’s a win-win for everybody if you do your job right,’ says Murray 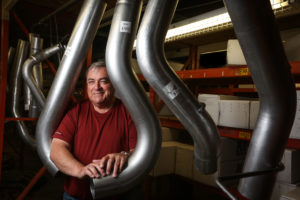 Barry Murray of APD Calgary is the 2017 Jobber News Counterperson of the Year. (Photo by Christina Ryan)

When you’ve spent nearly a half-century in the automotive aftermarket parts business, you’ve seen a thing or two.

Yet, there’s one constant that Barry Murray has noticed from the beginning. It’s why customers and colleagues rave about him and it’s why he’s the Jobber News Counterperson of the Year.

It’s about taking pride in your job as a counterperson. You’re here to help.

“If you can make the customer’s job easier, that’s what you’re here for,” said Barry Murray, counterman at Automotive Parts Distributors in Calgary. “I was told once that if you look after the little things, the big things look after themselves. If you tell somebody you are going to do something, then you do it. If you make a promise you’re going to do something, then you keep your promise.
If you tell a guy you’re going to phone him back, you phone him back.”

If a counterperson is doing all the above, they’re not only ensuring that the jobber is successful, but the customers’ businesses are as well.

“You help them grow their business because that’s basically your job,” Murray said. “If they grow then you grow. You become important to them. The more they buy, the more money you make.

“It’s a win-win for everybody if you do your job right.”

Part of Murray’s success is coming through when his customers need it most.

“I was told once that if you look after
the little things, the big things
look after themselves.”

“He does it on a regular basis,” said Amy Veldhoen of Safety In Action, a lift truck service and repair business in Calgary.

“We deal with a lot of older equipment and sometimes searching for parts takes time. But Barry does it. He goes through the books or looks on the Internet or however he does it. He’s readily available to take the time to find what we need.”

Rob Sinclair, owner of Gateway Autopro in Calgary, said Murray has come through for him recently when he needed yellow headlights for an older car he was working on. Everywhere Sinclair looked was a dead end. Until he asked Murray, that is.

“He said, ‘Let me look for you, I think I might be able to figure that out,” Sinclair said. “It took him a couple days but he found them. Even the Internet couldn’t find those. He’s got some connections still to this day.”

Murray has made himself stand out in counter staff circles, said Zara Wishloff, vice president of sales for APD in Edmonton.

“It’s the intangibles but it’s also just experience. Knowing different parts to get you out of problems and knowing how to source things differently. It’s hard to teach someone else that sort of thing,” he said.

Read the full profile in the upcoming November issue of Jobber News.