Why 75% of vehicles on roads may soon be zero-emission

The automotive aftermarket will likely need to prepare for a large influx of zero-emission vehicles in a relatively short amount of time if a new report’s findings play out as it predicts.

Upwards of three-quarters of passenger automotive vehicle sales in Canada need to be zero-emission vehicles by 2030 if the federal government is to achieve its emissions targets, according to a report from the C.D. Howe Institute.

Today, zero-emission vehicles account for just 3.5 per cent of sales. This would require “a complete transformation of Canada’s passenger vehicle market,” C.D. Howe said in its summary of the report, Driving Ambitions: The Implications of Decarbonizing the Transportation Sector by 2030 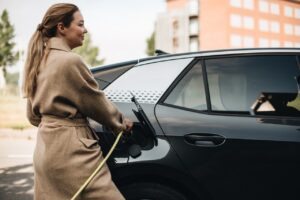 Canada would need about 7.7 million electric or other no emission-vehicles on the country’s roads in 2030 — equal to 30 per cent of the total vehicle parc in Canada — to cut enough greenhouse gas emissions to achieve Ottawa’s climate plan announced in December 2020.

Earlier this month, the federal government changed its target to 2035 to have all new passenger vehicles sold in Canada to be zero emissions. The government also said it will set interim targets for 2025 and 2030.

The C.D. Howe report noted that targets could be reached with an increase in the blending of biofuels, a 2.5 per cent annual improvement in the efficiency of internal combustion engines and zero-emission vehicles making up for 30 per cent of vehicles on Canada’s roads.

“Understanding the practical implications of transportation emissions goals will support policy-makers in considering the trade-offs involved in achieving those goals,” the report states.