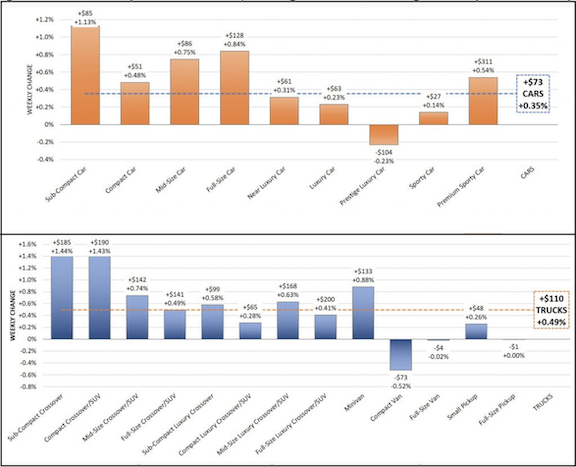 The situation is a concern, according to Canadian Black Book, because the demand for used vehicles is strong.

Consumer confidence remains fairly good, it says, even if one major index (Bloomberg-Nanos) suggests the economic recovery has stalled in the minds of consumers at the end of August.

“As August concludes, we end the last full month of summer with positive news on the wholesale value front,” the company’s latest market update states.

“This past week, both the car and truck segments increased in value,” it said. “The car segments were up by a record setting 0.35%, which is the best weekly performance over the past two years. The truck segments, which include vans, crossovers/SUV and pickup trucks rose by 0.49%, not a record, but the third best weekly gain seen in the past 24 months.”

The Canadian Black Book Used Vehicle Retention Index, which tracks the retained value performance of two to six-year-old vehicles, saw its largest increase since the index began in January of 2005.

“This clearly shows that the market remains in a recovery phase after the sharp declines of early 2020,” company analysts said. “With a great deal of uncertainty around the economic recovery, and expectations about growing supply, it is expected that the market will demonstrate some volatility, before longer term stability returns to wholesale values. Of specific concern is the still high level of unemployment and the growing number of business closures or downsizing of operations taking place currently.”

It said a review of the latest statistics on the COVID-19 virus in Canada reveals positive news. The overall trend is headed in the right direction, with the average number of new daily cases a quarter of what they were at the height of the pandemic.

“Our present concerns are twofold. As citizens become more fatigued with living with social distancing and various preventative health measures, they may become less vigilant with respect to following the advice of health officials,” the report said. “Secondarily, with back to school time fast approaching, there is concern that the school environment, despite efforts to reduce risk to students, staff and families, could result in a significant second wave of Covid-19 nationally. A large second wave could result in renewed lockdown measures which will further impair the economy and subsequently have a negative effect on the auto industry.”

For the automotive industry, current and expected future vehicle values would decline again if a second wave comes, it predicted.