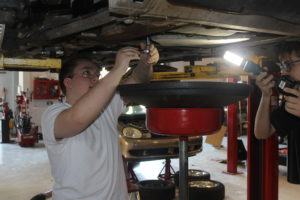 Auto tech teacher Antoine Labbé started Rebuilding Wheels, Rebuilding Lives in Windsor, Ont. to repair cars with his students at École secondaire E.J. Lajeunesse in Windsor, Ont. so that families in need would have a vehicle to get to and from work. From left, students Owen Seeger and Joseph Reaume service the transmission of a 2006 Pontiac Grand Prix in September 2016.

Antoine Labbé always wanted to give back to his community. He just didn’t quite know how.

The automotive tech teacher at École secondaire E.J. Lajeunesse, a French-language high school in Windsor, Ont., knew his skills as a certified automotive service technician could be put to good use by helping families in need to have a car to get to and from work.

“I’ve had (the idea) since I started teaching, but I just haven’t had the support or experience to launch a project like that,” he said.

In 2013, he applied for a grant through a program from home improvement chain Lowe’s, called Toolbox for Education. He had to show he had partners in the community to help with his plan.

That was easy, Labbé found.

He got in touch with the local United Way. He called up Family Services Windsor Essex. It didn’t take much to convince those groups.

“We threw the idea at them and they pretty much said yes on the spot,” Labbé said. The United Way, Labbé said, donates $5,000 a year to purchase parts. And Family Services takes care of the application process to find families in need of a vehicle.

Then he contacted local businesses. They, too, jumped at the chance to help out. Beverly Tire, for example, donated tasks like the safety inspection and e-test for certification. Benson Auto Parts secured parts donations from suppliers. A fellow teacher, Shelley Ryan, who used to work in the marketing department at Chrysler and now heads the business program at the school, helped with filling out the paperwork since Labbé admitted that wasn’t quite his forte. “I couldn’t have done all of this without her.” 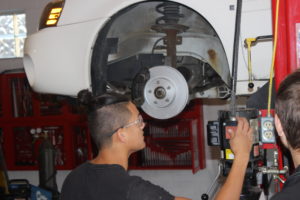 Hunter Hill, a student of the auto shop program, raises a 2006 Pontiac Grand Prix to replace control arm bushings in September 2016. Other work on the car included replacing the muffler, battery, struts and all brakes.

For Aaron Habib, Benson’s operations manager of southwest Ontario, being part of the project “was a no-brainer.

“To see that much passion to support people in our community was unbelievable,” he said, adding that it was “unreal” to see all the partners come together to back Labbé.

Armed with so much support, Labbé was awarded a grant of $9,000 to start Rebuilding Wheels, Rebuilding Lives. “We needed those community partners to make the project viable and to get the grant, he said.

The project got such a positive reaction because it was to serve a need within the community, he said. “In this area here, we have a challenge with not enough public transit,” he said. And for people who need to get to work, it’s tough if they can’t afford a vehicle. “It’s a serious problem here.”

Recipients need to have a job so they can care for and maintain the vehicle, Labbé said.

And the support grew. Labbé, who has been teaching for seven years, is partnered with Jeff Smith’s County Chevrolet dealership, which supplies three cars a year. Usually, these vehicles are trade-ins and the dealer handpicks what would be right for the project.

“it’s awesome to see the kids being a part of it and knowing that they’re helping the community and helping families,” said Barb Monette, office manager at the Chevrolet dealership. “People can get to work and back and help their families out. It helps them tremendously.”

The dealership also helps with the transfer of ownership, licensing and all the other administrative tasks that go into getting the car ready for the family. The dealer covers these costs and provides a one-year warranty on the powertrain. 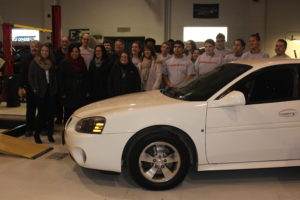 Students and partners of the Rebuilding Wheels, Rebuilding Lives project gathered for the giveaway of a rebuilt 2006 Pontiac Grand Prix in September 2016.

It’s lesson that his students can learn from. Labbé wants his kids to “help out and be involved in the community. I try to teach my kids that you got to do what you are able to do. Use your talents. Do something productive with your talents.”

And they responded. “The kids are pumped. You should see the students at these events,” Labbé said, adding that they’re “beaming” at events and “proud to be part of the project.”

And it’s not just his auto students helping out. Other departments like the culinary team and business class help put on the events when giving away the car. So far, five have been given away.

“The culinary arts class did a BBQ. The music class did a show for one event,” he said. “The business is in charge of setting up the event and coordinating logistics. It’s a school project.”

Labbé limits what kind of car he and his students will take in.

“I’m not a body mechanic,” he said, so any vehicle requiring such work won’t be accepted. But “something with a decent powertrain, ideally low mileage … ideally a transmission that is in good shape and doesn’t need rebuilding,” is what he looks for.

“We’re doing a lot of tuning up of the engine, timing belts, water pumps, shocks, struts, brakes all the way around, alignment (and) tires,” he listed as common tasks performed.

Labbé is thankful for all of the support he has received so far. Everyone “has been on board 100 per cent,” he said. And, he added, the program shows that anyone can use their talents to help others.