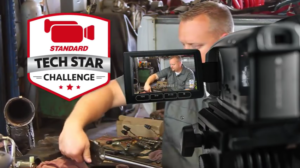 His winning tech tip can be found at StandardTechStarChallenge.com. Applicants uploaded a one minute video of their best tech tip to YouTube, which were then judged on originality, presentation and quality by SMP’s training department.

For winning, Cranford will take a trip for two to Irving Tex. He will record three installation videos with Ryan Kooiman, SMP’s director of training, which will then be uploaded to the company’s YouTube channel which has more than four million views and more than 5,700 subscribers. Cranford will also get $5,000 to purchase video equipment and automotive tools to start his own channel on the video-sharing website.