Search is on for the country’s most innovative shops

We want to see what you've been doing over the last 12 months!

Nominations are now open for the CARS Shop of the Year for 2018. 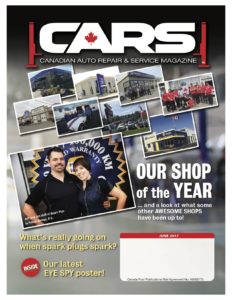 This annual award is meant as a way to recognize Canadian auto repair and service facilities that have made a significant change to their business or reached a significant milestone in the last 12 months.

Last year, we featured 10 shops from across Canada.

One had made a successful transition to the next generation of owners (Bernard’s Quality Cars in Flesherton, Ont.).

One had reached new heights of visibility within the community (Master Mechanic High Park in Toronto, Ont.).

Our Shop of the Year was Gear’s Plus, largely because of the irrepressible enthusiasm and vision of owner Jeff Hoff, who has embraced a culture of continual improvement in all areas of his shop.

Do you know a shop that has stepped up its game in the last 12 months? We’re looking for stories that will serve as an inspiration to the entire industry. We’d like to feature them in our June 2018 issue when we celebrate shop innovations and name the Shop of the Year.

This is a peer-to-peer award. We will only accept nominations from people within in the industry. We want to hear from shop owners and employees, their family members, and their parts suppliers. Customers are important to every business, but they’re really not a part of our process for finding the Shop of the Year. They don’t know about your processes, or the changes you’ve made in your supplier network, or the ambitious plans you have for expansion.

And while we love your enthusiasm, please submit only ONE nomination per shop. It is only the first step in the process. Prospective winners will be interviewed by phone to determine their eligibility for the award.

You can find the official nomination form HERE.

We can’t wait to hear what you’ve been up to in the last 12 months!