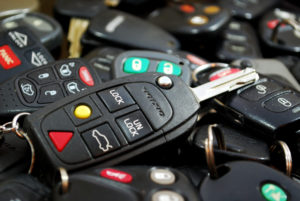 Many drivers will soon discard their keys, say global automotive executives in a KPMG report. Half of today’s car owners will dump their cars by 2025, they say, and a third of consumers agree.

It may not be too long until you look around and notice fewer cars parked in driveways in your neighborhood. Less than 10 years, in fact. The number of people calling themselves car owners could be cut significantly if things play out the way auto execs believe it will.

But that doesn’t mean shops will see fewer cars. Instead of owning, consumers will turn to rental services when in need of wheels.

Almost 60 per cent of 1,000 industry executives across 42 countries say half of today’s car owners won’t want to own a car in 2025, according to the Global Automotive Executive Survey, compiled by accounting and advisory firm KPMG.

More than a third of consumers agree with this possible future. Agreement went up as you went lower in age groups. Those aged 18-24 sat at 42 per cent, while only 19 per cent of those aged over 65 agreed.

“I love having my own car. I come from a different era. Maybe people don’t care, but I still think there’s a love affair with the car.”

Consumers would use mobility as a service (MaaS) — car-sharing and car rentals — once they are seemingly fed up with everything that goes into driving yourself around.

“This might show that the customer cannot yet let go of car ownership and will only tend towards shared economy mobility concepts (MaaS) when the cost and discomfort of a self-owned vehicle (discomfort of finding parking, traffic congestion, etc.) becomes significantly higher than the utility of car ownership,” the report said.

But Peter Hatges isn’t sold on the idea. KPMG Canada’s national sector leader, automotive has his doubts that things will play out the way the executives think.

“The jury is out for me as to whether people will resort to that kind of usage,” Hatges said. “I love having my own car. I come from a different era. Maybe people don’t care, but I still think there’s a love affair with the car. I think the technology inside the car, the fact that it’s yours, the fact that you’ve personalized it and can make it different, I think still stands out to people. So hopefully that’s not going to change.”

The aftermarket will continue to be served by consumers who want to personalize their cars, and that will be a market to exploit. However, Hatges warned, it won’t be a shop’s bread and butter.

I think the benefit is, you will be able to service a large and predictable fleet of vehicles. And that’s pretty good. That makes for good business because you’ll have an identifiable market.

“I think when people buy their own cars, I think there’s an inclination to make it different, so the aftermarket exists partially to serve that, partially to serve customers that want to maintain their cars, etc.,” Hatges said. The emergence of a “rental market or non-owner market” could lead to “a big reduction in aftermarket part usage and modifications of that nature. If you’re renting a car, you’re not going to change the exhaust system to make it sportier.”

More cookie-cutter cars on the road could mean added pressure from rental companies on manufacturers and suppliers. Expect to hear a lot about price concessions, Hatges predicted. “Big rental car fleets will start to maximize value … (vehicles) won’t be stocked with all the latest stuff as opposed to a car that you might buy yourself.”

And price concessions also will affect technicians, pushing change on the way the industry operates. The business model could shift due to the change in the number of car owners versus car renters.

“You’ll have big rental pools that are maintained on a more centralized basis,” Hatges said.

Car rental companies will ask for discounts and better service if they’re supplying a shop with a fleet of vehicles. But, Hatges said, it may be something shops are willing to do in exchange for the volume of work.

“I think the benefit is, you will be able to service a large and predictable fleet of vehicles. And that’s pretty good. That makes for good business because you’ll have an identifiable market. Then you’ll know exactly where the market is (and) then you know exactly what the market needs,” he said. “So you’re able to streamline your business accordingly. And while it’ll be price competitive, hopefully the volume impact of that makes it lucrative (to) deal with the size and scale of the rental fleets that might emerge.”


2 Comments » for Number of car owners expected to plummet