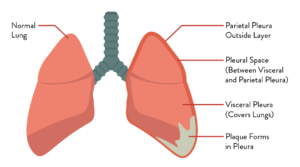 A normal lung on the left, compared to one with mesothelioma on the right, as shown by the Mesothelioma Cancer Alliance.

A jury has found NAPA Auto Parts and Genuine Parts Corp. liable in the asbestos-related death of a heavy equipment operator and awarded his survivors $81.5 million.

Jerry “Doy” Coogan died in 2015 of complications from mesothelioma, a cancer that is caused by exposure to asbestos. NAPA and Genuine parts were found to be negligent and strictly liable for the defective products containing asbestos.

Coogan was an excavator, said a statement from the law firm representing his family, Dean Omar & Branham. He operated and repaired backhoes, cranes and other construction equipment for many years, exposing him to asbestos products made or sold by the defendants.

The $81.5 million verdict is believed to be among the largest ever awarded in Washington, according to the firm. The trial was heard in Pierce County Superior Court in Tacoma and lasted more than 12 weeks. The jury returned its verdict after five hours of deliberations.