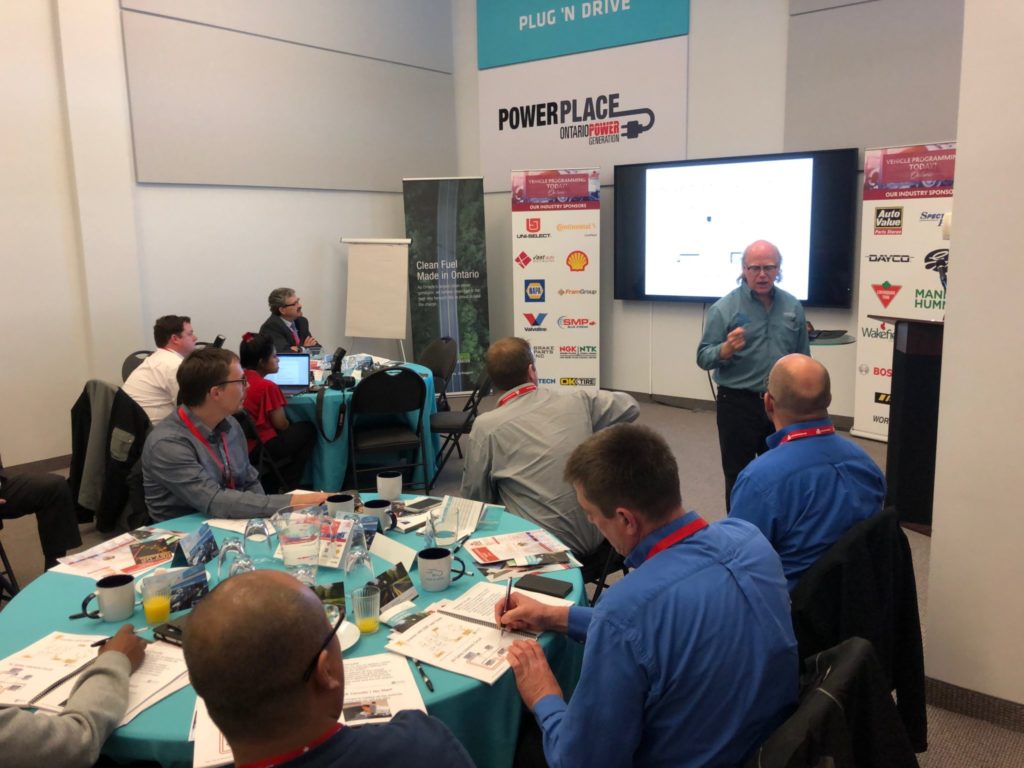 If your future includes servicing and maintaining hybrid and plug-in electric vehicles, you need to start getting ready for it now.

And step one is making sure you have the knowledge to keep you safe when you start working with high-voltage batteries.

As you can imagine, the stakes are high.

Craig Van Batenburg, founder of Automotive Career Development Center (ACDC) in Worcester, Mass., is one of the best-known aftermarket trainers on alternative-powered vehicles. He says the potential dangers of plug-in electric vehicles are such that he won’t even allow techs to take a class with him until they’ve passed an online safety course.

“If you want to learn with us, you have to pass a safety course first,” he said. “If you fail it, we’ll send you some books and resources – and not for free either – that will give you the basics. But until you can pass that test, you’re not coming.”

He’s not out to scare anyone. The dangers are manageable, he insists, but technicians need to be aware of the additional hazards they will be exposed to when working with high-voltage systems.

They will also have to develop a wider range of skills and knowledge and have access to specialized tools and equipment in order to be able to work safely.

Like it or not, servicing electric vehicles and hybrids can be a life-threatening undertaking if you’re not prepared for what you’ll find.

There’s a growing range of hand tools specially designed for use in high-voltage environments. These insulated tools have been commonplace in industrial settings, but more and more auto repair shops are investing in tooling with the distinctive fluorescent orange that indicates they won’t conduct electricity.

The line of insulated screwdrivers and plyers will undoubtedly continue to grow as more shops expand their services to include hybrids and plug-in electric vehicles.

These gloves come in a range of voltage ratings, including the 1000-volt rating recommended for auto service. The thicker the rubber, the less prone it will be to damage, but the more difficult it will be to work in. The protection they offer is worth every penny they cost.

These gloves will require a higher level of car than you may be used to, however. You can’t just leave them around, where solvents and chemicals could be spilled on them and degrade their usefulness, and where debris could fall into them to act as a kind of lightning rod.

“Think about the shop environment. You can compromise your gloves quite easily if you’re not careful,” Van Batenburg said. “There’s a lot of stuff happening. If you leave them on the bench and another guy comes over and starts grinding a piece of metal, you can’t be sure little fragments haven’t gone into the glove. They’re complete junk now. They’re ruined.”

Similarly, a single pinhole will render a glove useless. Checking for holes should be done every time you’re going to put them on. Just cuff the end and squeeze to increase the pressure inside the glove. If air escapes, they’ll allow a current leak.

When it comes to your preparation for work on hybrid and plug-in electric vehicles, nothing comes ahead of proper education about how to avoid fatal risks.

“What techs need is safety training. Without that, they can get themselves in a lot of trouble. There’s a lot of stuff you can do wrong,” said Van Batenburg. “People don’t like to be told not to do something. A good bunch of techs will do it simply because they were told not to. You have to educate them into how their actions have consequences.”

He doesn’t want his students to be afraid. He wants them to be confident around electricity.

“You have to get them over their fear. People can’t learn when they’re afraid.”

He says the aftermarket is waking up to the inevitability of an electric future… but they can start their training now, and ease into the complex work.

“If you stay away from cars that plug in the wall, the repair work is easier, safer, simpler, and more cost-effective. That’s where the money is right now. The cars are all around you. They need work,” he said. “Once you’ve gained the hybrid market and you feel you’re really good at that, then add cars that plug into the wall. That’s the next step in both complexity and expense.”

* the presence of high voltage
components and cabling capable
of delivering a fatal electric shock.

* the storage of electrical energy
with the potential to cause
explosion or fire.

* components that may retain
a dangerous voltage even when
a vehicle is switched off.

* electric motors or the
vehicle itself that may move
unexpectedly due to magnetic
forces within the motors.

* the potential for the release of
explosive gases and harmful
liquids if batteries are damaged
or incorrectly modified.

* the possibility of people being
unaware of vehicles moving as
when electrically driven they
are silent in operation.

* the potential for the electrical
systems on the vehicle to affect
medical devices such as
pacemakers.