How safe are your headlights? 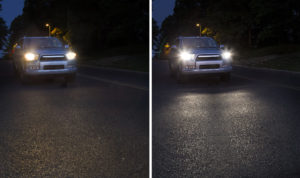 As headlights get older they start to dim and need replacing, just like tires, shocks, and brakes. The longer people wait to replace their lights, the more they will dull, causing safety issues with drivers at night.

Drivers are not able to see as well at night because human eyes are not able to adapt to the darkness. People can experience being blinded by lights from other vehicles and can also lose depth perception.

Studies have shown that 65 per cent of road accident occur during the night which can be attributed to the age of drivers, headlights that need replacing, as well as the driver’s surroundings.

As people get older, the amount of light that is needed to help them see increases. At age 40, the average driver may already need twice as much light to see on the road compared to a 20-year-old. At age 65, that need is dramatically higher. As the population of licensed drivers 65 years and older grows, the safety issue grows with it.

Having brighter headlights can only help this issue, according to recent public service announcement from an automotive lighting company.

For drivers to see better at night, their headlights need replacing every few years because the filament in a headlight bulb ages with use, time, and exposure to the elements. According to Ann-Marie Hines, senior marketing manager at Lumileds, the supplier of Philips automotive lighting products, headlights become fragile and start to deteriorate over time, which causes the light output to diminish.

“At the end of a typical service life, perhaps two to three years, headlight bulbs will likely be projecting a much shorter and less powerful beam light, than when they were new. From a driver’s point of view this is a critical safety concern,” said Hines.

The environment surrounding the drivers is another issue. There is little to no light on roads while driving, which makes having bright headlights even more important.

Lumileds engineers recommend replacing headlight bulbs after two to three years. They also suggest that drivers should upgrade headlight bulbs over standard bulbs because they are designed to do a better job of lighting up the road. This will help the safety of all people on the roads.

According to a study from automotive club AAA, the halogen headlights found in more than 80 per cent of vehicles on the road today failed to safely illuminate unlit roadways, a new set of upgrade halogen bulbs is what could make a difference in providing more safety on the roads at night.