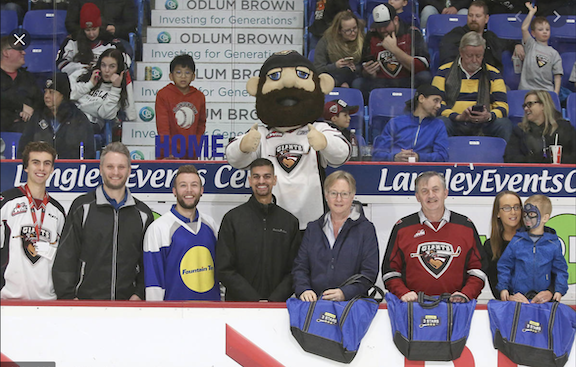 For the second year, Fountain Tire has honoured everyday heroes across Canada through its 3 Stars program.

This season, over 60 exceptional Canadians in 21 cities received public recognition from the company and their local WHL or OHL team.

The stars were recognized for their above-and-beyond efforts to make their cities a better place.

The individuals were nominated by their peers and selected as winners of the Fountain Tire 3 Stars program, a partnership between the company, the Western Hockey League (WHL) and the Ontario Hockey League (OHL), that honours everyday Canadians for their volunteerism, humanitarianism and generosity. The winners were publicly recognized at WHL and OHL games across the country in January and February.

“We asked Canadians to help us find people whose actions – big or small – make a difference, and the result was an inspiring list of individuals who help our cities thrive,” says Denise Gohl-Eacrett, director of brand and customer experience at Fountain Tire. “It is particularly meaningful for Fountain Tire’s local store owners to be able to give the unsung heroes in their own communities the recognition they deserve.”

This year’s winners include coaches and teachers, good Samaritans, fundraisers and volunteers. One woman from Maple Ridge, B.C., stuffs and distributes hundreds of Christmas stockings to locals who are homeless. An anti-poverty activist and philanthropist from Edmonton, Alta., draws from his upbringing in a low-income household in order to champion services that help end the cycle of poverty. A Sault Ste. Marie, Ont., man has volunteered with the Canadian Ski Patrol for more than 50 years. A couple in Brandon, Man., stage an annual Halloween haunted house that has raised more than $120,000 for their local Cancer Society.

The winners were honoured by local Fountain Tire store owners and their local WHL or OHL team during exclusive game-time presentations throughout January and February.