Fel-pro has fun with serious issue of leaks 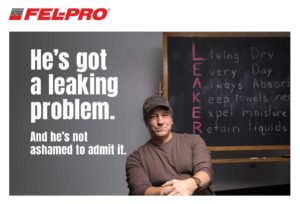 Fel-Pro is taking a humorous approach to highlighting the dangers of automotive leaks to customers.

The gasket-maker has enlisted television star Mike Rowe for a series of commercials that discuss the impacts of leaks. Fel-Pro has set in motion a comprehensive consumer awareness campaign aimed at helping vehicle owners identify many leaks including minor oil, coolant, and transmission fluid that could lead to having to spend more money than necessary.

Even though Fel-Pro is tackling this issue with funny conversations about embarrassing vehicle leaks, the company wants drivers to know the seriousness of the issue. Maintenance costs on unresolved leaks went up to US$73 billion in 2017 alone, according to the Automotive Aftermarket Suppliers Association.

These problems could cause issues throughout other components of the car, which is why acting quickly to resolve leaks is important.

The light-hearted take on the videos began in March and will run through to May. It will be supported by a multi-channel marketing campaign that includes both digital, social media, and public relations activities.

“Consumers are bombarded with marketing messages all day, every day. We wanted to break through that noise to make consumers aware that they can potentially avoid hundreds of dollars in engine or transmission work by addressing leaks sooner rather than later,” said Fel-Pro Gaskets brand manager Ann Skrycki-Mohler. “Our new campaign does that in a very creative and engaging way.”