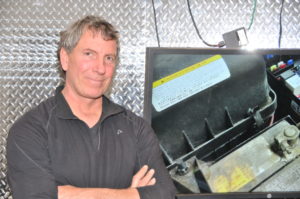 Independent shop owner Ronney Goulet was working alone one night in the winter of 2015 when a man he didn’t know came into his business in the small Quebec town of McMasterville.

“He wanted to repair a bumper that his daughter had damaged and asked if he could bring his car into the garage and do it himself,” recalled Goulet.

That small act of kindness paid big dividends for Goulet. The man he helped – computer programmer Robert Guidi – started dropping by frequently to chat and do free upgrades on Goulet’s computer. He also installed software that allowed Goulet to take and show pictures and video in real time on all of his electronic devices.

“He told me to have some fun with it and even use it in my business,” said Goulet. “That’s when a light went on in my head.” 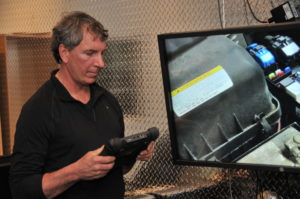 Frequently faced with wary clients who questioned the time and money he charged for major auto repairs, Goulet started using his cell phone and tablet to take pictures and videos of big jobs like transmissions, clutches and electronic issues.

“I usually take ‘Before’ and ‘After’ pictures of all the parts and I film the repair work I do with my phone or tablet,” explained Goulet. He would project those images, live, on one of two 50-inch television screens he installed in the reception area of his three-bay garage.

When presenting customers his bill, Goulet shows them photos and a fast-motion edited video of critical moments in major repair jobs that can take up to four hours to do.

“Sometimes it’s hard to explain to clients where the parts are and what you have to do to make repairs,” said Goulet. “Say you have to change a starter on a Honda CRV or on a BMW. You show the client everything you did on the screen and they say, ‘Okay, I understand now.’”

Goulet says customers have been both wowed and appreciative of his sound-less video presentations from the get go.

Customer complaints, he added, have fallen to zero since he started using the system.

“It has changed everything,” said Goulet. “The only comments I hear now are positive ones.”

Since August, when Le Journal de Montréal ran a story about his filming repairs, Goulet said he is also now getting an average of two new customers a day at his garage, which is located on the Richelieu River, a 20-minute drive southeast of Montreal.

“The publicity has been fantastic,” said Goulet, a licensed mechanic who grew up in the nearby south-shore Montreal suburb of Beloeil.

He apprenticed at a Canadian Tire garage and travelled the world as a decontamination well digger in his 20s before returning home to raise a family and run a mobile automotive repair business and a small garage.

He bought his current business in McMasterville – a former tire shop called Sanco Garage – in 2005 and he kept the name.

On its website the garage bills itself as the only garage on the south shore to charge only $50 an hour for automotive repair services.

In addition to general repairs and tire sales, the business also sells used cars “for all budgets.”

Goulet plans to add to that inventory by selling the software platform behind his in-house video service to business owners and professionals of all stripes across Quebec.

He recently got a patent for his customized system, which he dubbed Système interactif multifonctionnel – or SIM.

“It can be used by almost anyone: dentists, pet shop owners, construction people… you name it,” said Goulet. “But I’m focusing first on selling it to garage owners.”

According to Goulet, the asking price for his three-piece system – a flat rate of $4,900 or monthly royalty fees which includes installation and training – is small compared to the potential benefits for independents like himself, who make up roughly half of all garage owners in la belle province.

One advantage of SIM, he said, is that it can be used as an innovative tool that allows garage owners be proactive in educating their customers.

The system, he added, also provides customers with something novel and interesting to look at in his garage’s waiting room, which is also equipped with free wifi.

“Instead of reading newspapers, they get to watch their car being fixed,” said Goulet. “People tell me every day how much they like it.”

He noted, however, that the system’s added entertainment value wasn’t enough to increase the number of people who drop their vehicles off to be repaired without waiting.

“People aren’t waiting around to watch,” said Goulet. “It’s not that big of an attraction.”

Nor is it a distraction for Goulet or the other two technicians he employs. While the others also film the major repairs they do, only Goulet’s jobs are played in the reception area.

Goulet estimates they film roughly a third of all the repair jobs done in the garage.

“We don’t record any sound when we’re working because that wouldn’t add any value to what we do,” he said. “The impact is all visual.”

He said filming with cell phones and tablets takes a minimum of set up time and does not hamper the work that’s being done.

Asked whether he holds devices when recording, Goulet said he usually sets them on the engine block or a nearby work bench.

“It all depends on where the part I’m working on is located,” he said.

Another advantage Goulet sees of using SIM is what he calls “the trust factor.”

“Let’s not deny the fact that most people don’t trust their mechanic,” said Goulet.

He blames much of that mistrust on the fact that few people know or understand little about automotive technology and repair.

“People rely almost entirely on what their mechanic tells them,” said Goulet. “Having photos and video helps me to explain and show customers why and how I made repairs that can cost them hundreds or even thousands of dollars. And that only adds to my credibility and increases their trust in me.”