When fraud hits, jobbers are in for a long and distressing ride 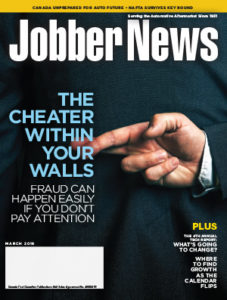 The mess Bruce Dupuis had to clean up was piled high.

More than two years ago, the owner of five NAPA Auto Parts stores in Nova Scotia had uncovered a significant fraud at one of his branches. The culprit? A manager who had been with the company for upwards of 20 years and who had been stealing money for about 10 of them.

To find out that someone in a position of power and trust within the company was taking money from the business was shocking, to say the least.

He estimated that about half a million dollars was swiped over the years, most of it through falsified cash refunds. Dupuis said the manager would wait until after closing and tell everyone to go home while he locked the place up. He would then issue a refund to himself, take the money, eliminate the paper trail and ensure the right amount of money was left in the register to match the invoices. Dupuis said he would also hold invoices for customers, and visit them to collect. But the manager would pocket the money instead of giving it to the business.

The store had no way of policing the activity.  There were “no policies in place to prevent the theft and no double checks in place to make sure that your people are being verified for what they do when they do it and how they do it,” Dupuis said.

And what stung even more was that Dupuis wasn’t the owner of the five jobber stores at the time – it was his father, who was in his 80s. At that age, he couldn’t deal with the situation. He handed over the reigns to Dupuis, who, in his 60s, had no interest in being a business owner.

“My father owned the business and I would actually describe this individual as probably my dad’s favourite employee,” Dupuis explained. “So just imagine: In your 80s you start to become frail, both mentally and physically. And all of a sudden, the guy that you liked the most, that you trusted the most, that you considered – after 20 years – might be a bit of a friend, has been stealing you blind for years on end.

The fraud would have continued if not for a little bit of luck. It just so happened that a glance at the sales history of a product raised eyebrows, Dupuis said.

“We’d issued a number of refunds for the same product and the sales for that product didn’t balance –we sold three [of the item] in the past five years but we refunded it five times,” he added.

Fraudsters typically never pull off their crime using low-ticket items, explained Marc Tassé, an anti-corruption, ethics and compliance expert at the Canadian Centre of Excellence for Anti-Corruption in Ottawa.

It’s not too often that you hear about fraudsters being jailed but that’s what happened in Dupuis’ case. Gregory Macdonald was sentenced to 18 months in jail and ordered to pay restitution of $100,000.

Still, it was of little comfort to Dupuis who went through a two-year nightmare of picking up the pieces.

“Well, it certainly sent the company for quite a jolt,” Dupuis said. “It just created chaos everywhere.”

“We as a company lacked all of the policies and procedures and things to make sure that employees aren’t stealing. Our internal workings weren’t as a strict as they should have been.”

“The mistrust it created with our customers was probably just as bad as the internal turmoil,” he described.

In the end, Dupuis figured the ordeal cost him about $80,000 beyond what was stolen. An expensive lesson, but one he hopes can be an example to all jobbers. Learn from my mistakes, he said.

“We as a company lacked all of the policies and procedures and things to make sure that employees aren’t stealing. Our internal workings weren’t as a strict as they should have been. Our documentation wasn’t as strict as it should have been. Our procedures for handling inventory, stock, cash, returns, credits, defectives – all were lax,” he said, adding that even something as simple as double-checking someone’s work wasn’t a policy his store had. That made stealing “quite easy” for Macdonald.

“Some are very creative. It depends on the aptitude of the fraudster,” he said about a crook’s ability to pull off the job. “And often in businesses like auto parts and car parts, the main thing is usually sales. Often accounting controls or financial controls are kind of far down the list of the priorities of these companies. They only have a limited amount of resources.”

Dupuis recommended other jobbers to document how everything is supposed to happen in the store everyday, from handling credits to core returns.

“If you don’t make sure that procedures are documented in how it’s done, it’ll fail,” he said.

Dupuis righted the ship and the business is running fine. Others, though, may not be as lucky when it comes to fraud, Kashton warned.

“It could be catastrophic,” he said. “It could in fact be so severe that it could endanger the life of the business.”