EDITORIAL: The cost of tariffs 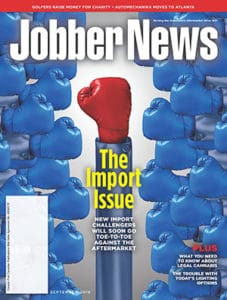 Oh, what a mess things have become.

U.S. President Donald Trump has been spewing threats like it’s a bodily function since before he got on the campaign trail. Now in the White House, he’s followed through on some, such as renegotiating the North American Free Trade Agreement and imposing steel and aluminum tariffs.

Now the threat of adding tariffs on vehicles imported south of the border seems to be the next plan of attack. A short-sighted one, as many of his seem to be.

No one seemingly gains from any of this. There appear to be only losers – consumers and the automotive industry alike. The aftermarket will play a key role in ensuring costs – monetary and otherwise – are limited.

On the carmaker side, vehicle costs will go up – anywhere from $1,800 to $5,800, according to one estimate – if 25 per cent charges are slapped onto vehicles brought into the U.S. Many import brands have plants in the United States that provide thousands of jobs, thus making it seem counterintuitive to throw roadblocks in front of them.

At the end of the day, it’s the consumer who pays when supply chains are hit with price increases.

Canada makes about two million vehicles per year – 900,000 fewer would be made if import tariffs are implemented, according to a CIBC report. TD Bank says 160,000 jobs could be lost. In the U.S., auto sales are expected to decline into 2020. If import tariffs come into effect, numbers could see recession-like drops, experts warn. Fewer new vehicles entering the market would mean long-term
pain for the aftermarket.

Toss in steel and aluminum tariffs pushing up the price of parts, and rough times are in the forecast.

At the end of the day, it’s the consumer who pays when supply chains are hit with price increases. When things become costly, they typically don’t spend or they seek out cheaper alternatives.

The latter is a scary proposition when you’re talking about automotive. In our cover feature, Kumar Saha of Frost & Sullivan warns that counterfeit products could become more appealing to consumers. The aftermarket already has concerns over cheaply-sourced items – so-called “white box” parts – and the problem could be exacerbated.

This will require vigilance throughout the aftermarket. This isn’t like buying knockoff jeans. It’s not uncommon for customers to bring their own parts to a repair shop, but harder questions will need to be asked by shops going forward about their source. The next time a customer shows reluctance to buy a part because of price or claims to be able to get it cheaper online, counter staff need to thoroughly explain the issues and risks.

The aftermarket serves a purpose greater than just being friendly and helping customers get what they need – everyone is responsible for the safe transportation of people.

This industry will play a critical role going forward. One, at the top end, is to fight for the consumer and rebuke tariffs, regulations and threats that, frankly, don’t make any sense whatsoever in order to save jobs, save unnecessary expenses and make the industry stronger. Secondly, the front line of the aftermarket will be essential to ensure the integrity of the industry, making sure customers understand the realities of the situation and ensure they are driving away safely and with the right product.

The industry is facing a cloud of uncertainty. Work needs to be done to ensure the cloud doesn’t become a storm.