Ontario Ministry of Transportation officer warns repair shop owners not to do what convicted technician Joe Ramono did. 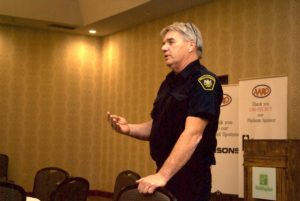 MTO enforcement officer Rob Stickan offers insights to a room full of repair shop owners at a symposium of the Automotive Aftermarket Retailers of Ontario.

The story of the Ontario technician who was found guilty of issuing a fake safety certificate for a vehicle that was involved in a deadly crash, is being used as an object lesson by Ontario’s Ministry of Transportation (MTO).

Speaking at a symposium organized by the Automotive Aftermarket Retailers of Ontario (AARO) on Saturday, MTO enforcement officer Rob Stickan said there were important lessons to be learned from the case of Joe Ramono.

Stickan went over the facts of the case, which stemmed from a 2012 crash that took the life of a 27-year-old woman, Abigail MacNaughton.

He explained the facts of the case as the jury heard them, and told of a subsequent MTO investigation which resulted in 31 ministry charges against Ramono and his business, Pro Street Auto Sales and Service in Stouffville, Ont.

“As part of the investigation, I did look over some of the vehicles that he certified,” Stickan said. “We found that he had made false statements in issuing safety standard certificates. We got some statements from vehicle owners who acknowledged that they just went to a coffee shop and laid down $100 for a safety certificate.”

As a result of the investigation, Ramono’s career as a safety inspector is over.

“The ministry launched a revocation process. They were saying, ‘We want you out of our program,’” Stickan said.

Ultimately, the revocation process was unnecessary because the terms of Ramono’s bail prohibited him from issuing safety certificates, and during the course of the criminal trial, Ramono did not renew his license.

“So he essentially self-revoked,” Stickan said.

“Let that be a lesson learned,” he told the room full of Ontario repair shop owners. “A lot of us have been asked, ‘How about letting that item slide’ or been asked to turn a blind eye to something, or do a favor for someone. But keep this in the back of your mind, that if you did let an item slide or turn a blind eye to something, that car is out on the same roads that your family is travelling on. Abigail could have been your daughter.”

There are 13,000 inspection stations in Ontario. More than 30,000 Ontario technicians are registered as inspectors in the program.