Joe Ramono fraudulently certified a 1995 Dodge Ram a month before it went out of control and killed a 27-year-old woman. A jury was asked to determine if he was criminally negligent in her death. 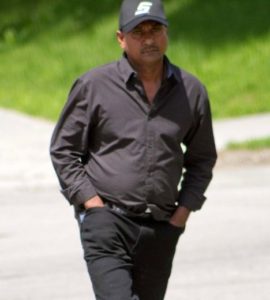 Joe Ramono’s career in the automotive aftermarket is over.

The 52-year-old former shop owner and licensed technician was found guilty this summer of issuing a fraudulent safety certificate for a vehicle involved in a fatal crash in 2012.

That’s on top of more than 70 Ministry of Transportation Ontario (MTO) charges, for which he was convicted last year, and $31,000 in fines imposed for infractions related to issuing safety certificates.

He told CARS magazine he is no longer in the business of servicing vehicles.

The story behind one of the safety certificates he issued – the one for the 1995 Dodge Ram 2500 that went out of control on Peterborough County Road 4 on Aug. 3, 2012 and killed 27-year-old Abigail MacNaughton – played out in Ontario Superior Court this summer.

Joe Ramono pleaded not guilty to charges of criminal negligence causing death, and uttering a forged document. He was forced to defend himself against allegations that he signed a fake safety certificate for the truck, never having actually inspected it. Or, if he did, having done so with criminal incompetence.

Either way, said Assistant Crown Attorney Lisa Wannamaker, in her closing argument, “Mr. Ramono showed wanton or reckless disregard for the lives and safety of others… He failed to do what he was supposed to do, what it was his responsibility to do: inspect vehicles and only issue a safety certificate if they qualify for one.”

Repeatedly through the four-week trial, Wannamaker spoke of the importance of vehicle safeties, and the reason they’re so carefully regulated.

“This is a big deal,” she said. “As a mechanic, you are guaranteeing the safety of a thing we all understand is potentially lethal to us and to others on the road. You are sending a vehicle out to travel the roadways with all of us, and you are verifying through your inspection, that it is safe.”

The story that unfolded during the course of the trial began with the sale of the truck “as is” on July 12, 2012 to a young man named Jordan Schiemann. 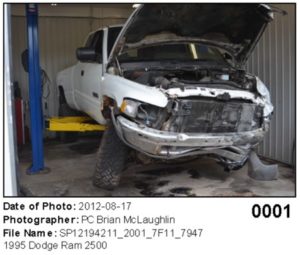 Nothing was above board about this sale. Schiemann would testify in court that he asked the seller, Richard Spence, to alter the receipt to show a sale price of just $500 rather than $7000, so less tax would have to be paid on it. He also admitted to lying about having obtained insurance for the vehicle. And, most notably, he asked Spence for help obtaining a “phony” safety certificate.

Spence, who had bought a fake safety two years earlier when he initially bought the truck from his brother, said he could help him out on that point. He put Schiemann in touch with a co-worker named Scott Tucker, who’d dealt in fake safeties before.

Called to the witness stand Tucker acknowledged that he had agreed to obtain a fake safety for the pickup. The cost was “about $200” and all he needed was the vehicle identification number, the odometer reading, and the color, make, model, and year of the vehicle. 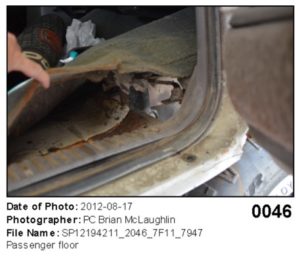 In his testimony, Tucker told prosecutors that he didn’t know that obtaining a fake safety was illegal, and he insisted – as Spence had also done – that he did not benefit financially from the transaction.

Asked why he got involved, Tucker said, “I’ve asked myself that many times. Just foolish, I guess.”

In any case, he passed the money and information on to a Scarborough technician, who contacted a counterperson at a Scarborough parts store for the name of a technician who could do the safety. That counterman offered the name of someone he took to be a licensed mechanic – a man named Brian Bush, who is now deceased. 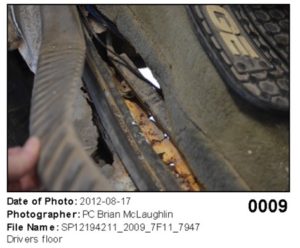 Court never did learn how Joe Ramono ultimately came to be the technician of record on the Dodge Ram’s safety certificate, but his signature is on the document, certifying that no deficiencies were found.

“Whether it went through Brian Bush, or more people in-between, what matters and what we know for sure, is that Joe Ramono signed that safety,” Wannamaker said. “He acknowledged that fact [to police]. It was his safety, his responsibility, no matter how many hands it went through.”

Perhaps the first sign that something was wrong with the safety was the fact that it was dated July 4, 2012, some eight days before Schiemann actually purchased the vehicle.

Schiemann and his friend, 21-year-old Billy Towns knew that the vehicle needed work. Schiemann, who considered a career as an automotive technician himself, installed new ball joints and U-joint. He also purchased a steering shaft and had plans to purchase a steering box online to eliminate excessive play in the steering.

The new steering shaft was still in the bed of the truck about a month later when the truck, with Towns at the wheel, was involved in the fatal collision.

On that day, Aug. 3, 2012, Towns attempted to pass three cars at once at a very high rate of speed on a two-lane highway. He testified that when he attempted to bring the vehicle back into its lane, he had trouble steering. The truck went from one soft shoulder to the other, with Towns madly trying to correct the oversteer.

As Abigail MacNaughton’s vehicle approached, the truck fishtailed back into the middle of her lane. The collision actually pushed her small vehicle backward a significant distance from the point of impact.

MacNaughton was airlifted to hospital, where she later died. 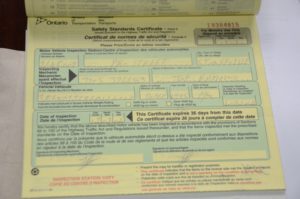 The safety certificate that a jury found was fraudulent.

A search of the premises revealed a number of shortfalls for a certified Motor Vehicle Inspection Station.

“You have to meet certain conditions in order to issue Safety Standard Certificates (SSC),” MTO enforcement officer Steve Gimera testified in court. Among them, the station must have specific tools and equipment, books of unused safety certificates must be kept secure and on the premises, all paperwork related to inspections, including work orders, must be kept on site, and inspection handbooks and Ministry circulars must be available.

Also missing was the work order for the Dodge Ram 2500. It was never produced, the Crown contended, because it was never done. 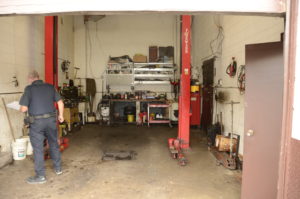 Following several visits, MTO laid 72 charges against both Ramono and his business, with combined fines of some $31,000. He was convicted in a Newmarket court in 2016. The bulk of the charges related to bad record keeping, but there were also allegations of selling safety certificates for vehicles that would never have passed a proper safety inspection.

According to a televised report on local TV station CHEX, “court documents state the investigation turned up instances where certificates were issued to vehicles with corroded brake lines, steering wheels with excessive free play, and vehicles with rusted and rotted holes. Court documents state that none of those cars would have passed a routine safety inspection, yet certificates were issued.”

A post-crash inspection of the 1995 Dodge Ram driven by Billy Towns proved that it was among the vehicles that should not have passed a safety inspection, court heard. Among the deficiencies were three that should have led to an automatic fail.

* While the exhaust system was largely intact and attached, it had no muffler.

* And the free play in the steering wheel was excessive – measured to be over 120mm. The allowable amount of free play for this vehicle was 55mm. Gimera testified that he’s done hundreds of inspections and never seen a free play measurement that high.

Several times during the trial, lawyers discussed a ‘but for’ test, which suggests that but for the improper certification, the accident would not have occurred. The Crown insisted that was, indeed, the case.

“That truck should never have passed a safety inspection,” Wannamaker said. “That truck, that vehicular ticking time bomb with holes in the floor, no muffler, rusted out cab mounts, and excessive pre-existing free play in the steering should never have been allowed on our roads. But for Joe Ramono forging that safety, the one with no work order and no defects found, Abigail MacNaughton would not have been killed in a collision with that 1995 Dodge Ram pickup truck.”

Ultimately, however, jury members did not agree. After 24 hours of deliberation, the eight women and four men found him not guilty of the criminal negligence charge. They handed down a verdict of guilt only on the forgery charge. 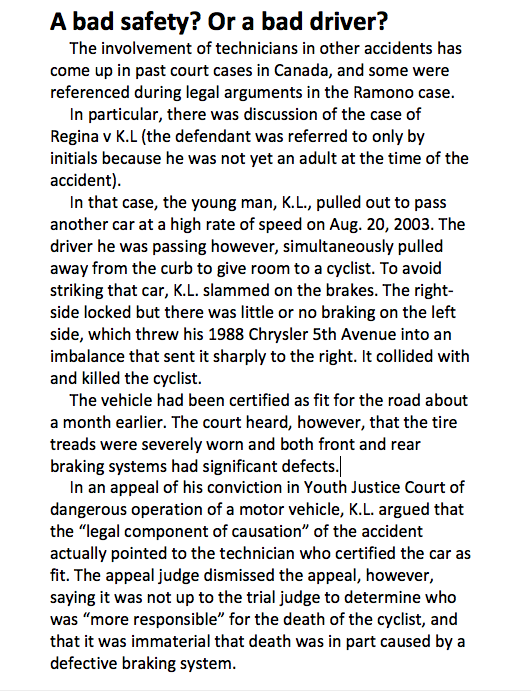