Which shop will survive?

It’s tough and getting tougher for small shops to thrive in today’s economic climate. Here’s why.

In the last year, I’ve come to realize that I am spoiled. Absolutely spoiled rotten!

For almost 10 years now, I’ve been providing management training, business consulting, and performance coaching to hundreds of automotive shops. I’ve become accustomed to working with shop owners who are prepared to invest time and money in their businesses. I’ve watched most of these shop owners learn new concepts, work hard to implement them in their businesses, and reap great success for their efforts.

But recently I’ve been exposed to shop owners who don’t take training of any kind. I met one owner who had been in business for five years, yet did not know what an income statement is. Another owner had no proper system for work orders; he simply wrote down the parts and labor on scraps of paper and charged the customer accordingly.

Believe it or not, in 2015 there are still shop owners who think the dirty back seat from an old car is suitable for guests in their waiting area. They think it’s perfectly normal to have a shop floor that is covered in grease.

Some owners actually believe that charging customers properly for work provided amounts to greed. They think shops that make a profit are acting immorally and unethically, and are getting rich off of their customers’ backs.

No wonder I’ve been hearing so much about shop closings around the country!

I know that each closure has its own particular set of circumstances… but there seems to be a common thread. Small shops and those that are poorly run cannot afford the technology and training it takes to stay current in our industry. They’re working on older vehicles, which are usually owned by consumers who have less disposable income.

They are not seeing the four- to seven-year-old vehicles – that most profitable of categories.

It used to be – up until the early 2000s – that the aftermarket had the lion’s share of those four- to seven-year-old vehicles. According to the AIA’s 2014 Outlook Study, the aftermarket has dropped to 42% marketshare.

Everything I’m seeing leads me to predict that in five years we will see very few viable repair shops that are smaller than four bays and staffed by fewer than three technicians – especially if one of those techs is the owner.

How have I come to this dire conclusion? It’s all in the latest statistics about our industry.

I always take a close read of the AIA’s Outlook Study, as I do with any reports from J.D. Power & Associates, or DesRosiers Automotive Consultants. These organizations don’t specifically make the prediction I’m making, but when you combine and overlap the data from the different reports, you can see patterns come into focus.

Rather than quote a lot of studies and show a lot of graphs, I’m going to run two business models past you, based on many shops that I see. I think the numbers will tell a very interesting story and prove my theory. I also believe that shop owners might see themselves in the numbers and either take confidence from them or the inspiration to change the way they’re operating. I hope it motivates everyone to face the new realities of our industry, and take the proper training to implement solid business principles. Either that or get out of the industry.

Take a look at the following table describing two automotive repair shops: Charity Auto, and Performance Auto. They both use the same labor rate of $81.83 per hour… but they have vastly different outcomes! 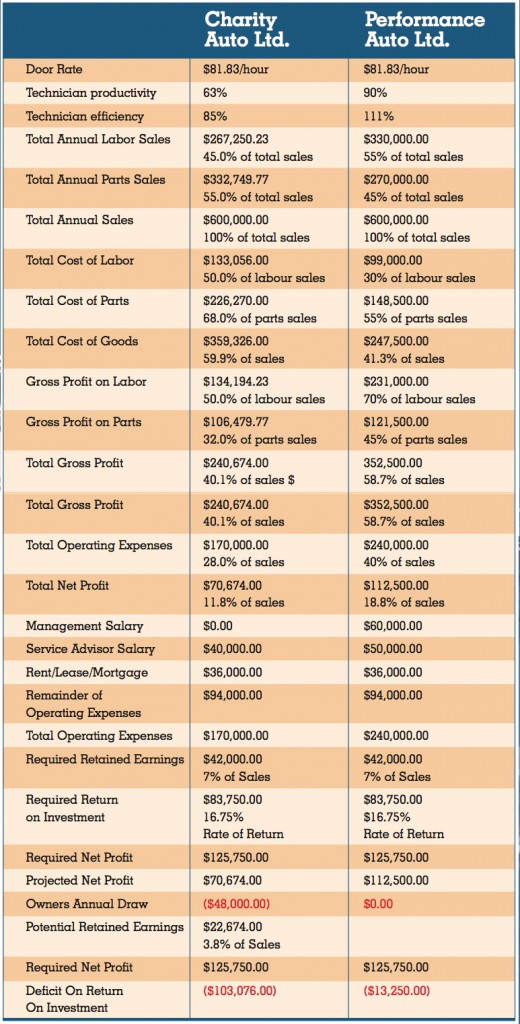 Looking at Charity Auto’s vital statistics, the first thing to note is that its parts-to-labor ratio is upside down. Rather than being 0.8:1.0, it is 1.0:0.8.

Charity Auto’s labor gross profit margin on three technicians is only 50% rather than 70% which is the benchmark for our industry, and their parts gross profit margin is only 32% rather than the benchmark of 45%. I see numbers like this hundreds of times with new clients, whether they have $600,000 a year in sales or $1.5 million. It seems like these are the default settings for our industry. That’s the way we’ve always done it.

The shop shows a net profit of $70,674, which is 11.8% of sales, but note that the owner does not take a management salary out. Instead, he takes a yearly draw of $48,000. That drops the net profit down to 3.8% of sales. So basically we have a technician who thinks he is a business owner. All they’ve really done is bought themselves a job that comes with great liabilities and high financial risk.

The Automotive Aftermarket E-Learning Centre has research to prove that it takes up to 7% of sales in net profit kept as retained earnings to keep an automotive shop current in today’s marketplace. Banks, investors, and other lenders say that for the automotive industry the rate of return on investment should be 16.75%. The reason it’s that high is because of the high failure rate of automotive businesses, and high financial risks and other liabilities involved.

Now let’s look at Performance Auto. It also has annual sales of $600,000. The difference is that this shop is operated close to the benchmarks. The parts-to-labor ratio is perfect, margins are right at the benchmark, and the owner is actually taking a management salary of $60,000.

This comparison gives us an important insight into the future of smaller shops. They have a huge challenge because it’s so difficult to achieve the return on investment they require.

You can see that even Performance Auto, which is operating at or near benchmark, still falls short on the net profit required to get a decent ROI. Even with all its skill and progressive policies, it is only managing $112,500 in net profit.

Your response might be to question my target ROI of $125,750. You might think that even a 10 or 12% return on investment would be great. After all, it’s still better than a bank! Well, let’s take a look at some factors that could change.

There are very few markets that I work in where you can hire a quality technician for less than $28 to $30 an hour. So if you factor that in, you fall $21,800 further behind.

I’ve also made the assumption that these technicians are going to work an average of 168 hours a month. But it reality, you have to take a few days off into consideration: vacations, days off, and sick days. Even if we only lost 5% capacity, we would be short more than $16,000 in labor sales in a single year.

And what happens if we don’t own the property and the landlord decides to raise the rent by 10%. That would put this shop another $3,600 behind on profit.

The reality is that some small shops will stay open and generate enough of a wage for the owner to survive, but there will be little left for a retirement. In markets where the real estate is less expensive, some of the better small shops will be fine. In other cases, the value of the real estate and the cost of staying in business will not make sense. Many smaller shops will close, either torn down for condos, or the victims of inevitable rent increases when property values make higher rental incomes possible.

But most of these shops will close because they are operated the way Charity Auto is, by owners who have simply bought themselves high-risk, low-paying jobs.

With high stress and poor returns, this will get old very quickly.

Murray Voth is a consultant and trainer with Total Automotive Consulting & Training Inc. in Edmonton, Alta., which runs the ProShop program across Canada. He can be reached at murray@proshopmanager.ca


2 Comments » for Which shop will survive?