Driveability issues are almost guaranteed when a PCM comes to the wrong conclusion at the end of a learn process. 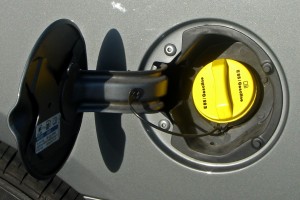 You wouldn’t think that the kind of fuel a vehicle uses could have a dramatic impact on its driveability. But with today’s highly complex engine-control strategies, even small variations in fuel characteristics can start a negative chain of events that leaves you stumped.

This was clearly illustrated to me recently when a 2009 Ford F150 pickup came in with an illuminated check-engine light. I didn’t think anything of the fact that it had a 5.4L flex fuel engine.

There were no associated driveability issues, so I hooked up the Ford Integrated Diagnostic System (IDS) and found codes P0174 and P0150 stored in the powertrain control module (PCM).

The P0150 indicated a problem with the Bank 2 upstream oxygen sensor circuit. The P0174 indicated that Bank 2 was running lean and that the PCM had reached its compensation fuel trim limit. A road test using the data scan feature of the IDS showed Bank 2 fuel trim at its upper limit (near 30%), and a slowly switching Bank 2 sensor. Bank 1 fuel trims were normal at less than 5% either side of zero.

There were some technical service bulletins that seemed relevant. TSB 13-3-5 warned that the PCM should be reprogrammed to the latest calibration for codes P0130 or P0150. And TSB 11-3-27 made reference to lean codes P2195 or P2197, and reminded techs to replace O2 sensors if the truck was built at the Kansas or Dearborn plants before a certain date. This particular truck was not displaying P2195 or P2197, but it did fall into the categories for plant and build date. Based on this information and the slow-switching state of the Bank 2 oxygen sensor, I contacted the customer and recommended replacement of both upstream O2 sensors and PCM reprogramming, as per the TSB.

The repairs were completed, the Keep Alive Memory (KAM) was reset, and the truck was road tested for 10 highway miles. Fuel trims on both banks stayed within the normal range at both highway cruise and idle conditions, so the truck was released to the customer. Another job well done, right?

I was dismayed to see the truck back two days later. The customer was now complaining of a very poor cold start and rough idle with black smoke. The concern would last for about 50 seconds and would occur only after a cold start. After that, the truck would run perfectly. The check-engine light was not on but clearly there was over-fueling right after a cold start.

Another IDS diagnostic revealed no codes stored, but I did see some interesting data. Fuel trims would go positive around 9% on the highway, and turn negative at idle. While those amounts are still within normal parameters, I suspected a mass air flow (MAF) issue. I watched the MAF data during wide-open throttle runs. The data appeared to be normal. Nevertheless, I pulled the MAF sensor, visually inspected it, and sprayed it with a cleaner. But that didn’t solve anything.

I decided to hook up a gauge and watch the fuel pressure. It showed 56 psi on initial start up. Then, after five seconds of running, it would drop to 45 psi. A quick tap on the accelerator pedal would immediately bring the pressure back up to 56 psi. After a few seconds, it would drop to 45 psi again. These drops and increases were instantaneous. The spec shows that the fuel pressure should be 55-60 psi. So did this engine have the proper pressure or not?

It was back to service info to do some research. 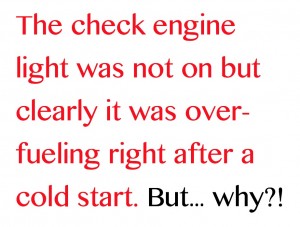 It turns out this truck uses a mechanical returnless fuel system with a module-controlled two-speed pump. Under high fuel demand conditions, the PCM asks the fuel pump module (FPM) for high speed and the FPM delivers constant battery voltage to the pump. Under low fuel demand conditions, the PCM asks the FPM for low speed and the FPM delivers an on/off duty cycle to the pump to slow it down and save energy. The FPM is located under the truck on the frame rail at the rear. The wiring is easily accessible for testing, so I used an oscilloscope to verify that it had a nice clear duty cycle signal in low speed and a solid battery voltage (and ground) in high speed. Clearly the pump was receiving the proper supply… but was the pressure supposed to go lower than 55 psi in low speed?

I decided to jumper the pump at the FPM so that it stayed in high-speed mode and delivered a constant 56 psi, which was in spec. I left it outside overnight and tried a restart in the morning. It still had a terrible idle with occasional stalling and thick black smoke. Again, after a poor start, the truck would run perfectly.

Since I had the IDS installed, I took the truck for an extended road test out of sheer frustration. I was looking through data readings and saw inferred flex fuel (IFF) showing 66% alcohol content. I know the customer does not use E85 fuel, so I’d expect to have 10% or so alcohol content in the fuel. I thought something was amiss with the 66% reading.

A Ford general service bulletin (GSB) states that on 2004 and newer Fords, the flex fuel sensor and module have been deleted and the ethanol percentage is now inferred. Resetting KAM will cause the PCM to initiate a relearn and infer the air-fuel ratio immediately after going into closed-loop operation.

Now everything was making sense! This truck learns alcohol content by watching fuel trim, MAF readings, and injector pulse width. Low fuel pressure will have the same effect on the learn process as high alcohol content in the fuel.

I performed a KAM reset to return the alcohol content to zero, and I left the fuel pump jumpered to high-speed mode. The next morning, the truck started perfectly and ran smoothly. I did a data scan road test with the pump still jumped to high. I drove long enough to allow the “IFF LEARNED” display to switch from “no” to “yes.” The learned alcohol content showed 12%. That’s about right for our fuel. I removed the jumper from the pump and let it function as designed. After another KAM reset and road test (until the “IFF LEARNED” display switched to “yes”), the alcohol content was showing over 60%.

Each molecule of ethanol contains less heat energy than gasoline. For E85 or other high alcohol fuels, this means a richer air-fuel ratio (9.8:1) is required. The inadequate fuel pressure/volume when the pump was in low-speed mode was causing longer injector pulse widths to keep the oxygen sensors happy, thus fooling the PCM into inferring a much higher alcohol content than actually existed. This learned alcohol content caused the PCM to command more fuel overall, causing the over-fueling condition on cold starts. It ran OK warm because as soon as the O2 sensors warmed up enough to force the system into closed loop, the oxygen sensor input gave the PCM feedback on controlling fuel supply.

The remedy was a new fuel pump and a tank cleaning. Now the gauge showed over 55 psi of fuel pressure under both operating parameters. A KAM reset and another completed “IFF LEARNED” road test showed a learned alcohol content of about 12%. The truck was running normally.

Essentially, by fixing one problem, we restored the PCM’s ability to learn and store flex fuel info, which then exposed an existing failing fuel-pump issue.

As engine control systems continue to evolve, there will be more things to keep in mind when we diagnose drivability issues. Before you start poking around, make sure you know what factors could be complicating the situation.

David Leduchowski is the owner of Integrity Auto Inc. in Teulon, Man., and a member of the CARS Advisory Panel.