When a lubrication issue compromises engine health, the oil itself is rarely the source of the problem. More likely it is a lack of proper oil maintenance. 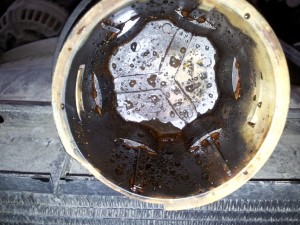 The water inside this Chrysler oil filler cap is a major sludge-contributing factor.

While filling my truck with fuel recently, I noticed that there were no vehicles at the pump with the hood popped so their owner could check the oil.

Most if not all owner’s manuals clearly state that the engine oil should be checked at every fill up. Yet, hardly anyone ever does it.

There’s a reason the carmakers want their customers to check the oil. The modern internal combustion engine may be a technological marvel, delivering better fuel economy and fewer emissions than ever… but it still needs oil. And if it doesn’t have the right amount of the right kind of oil, a catastrophic failure may not be far away.

A failure to appreciate how technologically advanced oil has become, and the difficult conditions it must contend with – from hostile engine environments to consumer neglect – is where problems usually begin.

Engine lubrication has been the central issue in an untold number of identified pattern failures, class action lawsuits, vehicle recalls, and TSBs. The actual cause of the failure or wear issue is rarely discussed (manufacturers don’t like talking about their mistakes) but in just about every case it wasn’t the fault of the engine’s oil.

Yes, there are a great number of engine oil lubrication issues out there. Some have been addressed by the manufacturers. Others have not. And some are so new that solutions are still being developed.

But don’t fall into the trap of blaming the oil. Usually, it’s not to blame.

Engine oil sludge has been an issue since the internal combustion engine was first developed.

It can be caused by a long list of things, including poor quality oil, infrequent maintenance, non-specified oil, stop-and-go driving, and coolant contamination. Most often however, engine oil sludge (or oil gelling) results from an inefficient or inadequate PCV system that allows too much moisture to accumulate in the oil. That and excessive temperatures.

Oil temperature is critical. Oil that is too hot is just as damaging as oil that is too cold. Engine makers have to take the surface temperatures that oil comes in contact with into consideration during the design stages.

This Cadillac made a “big bang” and suffered a catastrophic failure. After removing the valve covers, I saw there was no timing chain.

This was what was left of the Cadillac timing chain after the front cover was removed.

The engine oil’s anti-oxidation additive package slows the formation of sludge deposit precursors, and the detergent additive package holds the microscopic sludge-forming solid particles (soot) in suspension so the oil filter can deal with them.

But all this technology can be foiled by a small design flaw. Toyota has had its share of sludge issues, starting in 1997 and continuing to 2002 models. The majority of the issues were with the 3.0L V6 but a number of 2.2 L 4 cylinders were also involved.

Toyota seemed to fix the issue after the 2002 model year and put most of the blame on the customer for not changing the oil enough or for using the wrong oil.

Technicians and oil companies, however, tend to agree that there probably was an issue in the PCV system that caused the problem.

In 2003, Toyota changed the oil separator design in the PCV system by enlarging the return holes in the baffle system under the valve cover to allow the oil to drain out faster and prevent the system from clogging up. The problem seems to have subsided after this change.

Chrysler had more than its share of sludge problems with its 2.7L V6. The 2.7 had very tight oil passages that restricted the flow of oil, leading to overheating conditions, a prime cause of sludge formation. 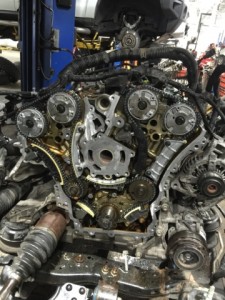 A 3.6 V6 GM engine removed from the vehicle, about to have timing chains and guides replaced.

A Chrysler engineer was later quoted as saying the issue may have been caused by an attempt to reduce the operating costs of the vehicle. The company reduced the size of the oil sump from 6 litres to 5. The oil’s additive package was designed to deal with sludge-producing elements, but infrequent oil changes meant early depletion, with sludge being the result.

Reducing the amount of oil in the Chrysler 2.7 meant it couldn’t tolerate much neglect. Other manufacturers have suffered similar fates when it comes to sludge formation.

VW and Audi didn’t get the word out that the 1.8L 4-cylinder turbos built up until 2004 needed full-synthetic oil. The use of a conventional engine oil led to coke and sludge formation that caused many engines to expire.

Saab tried to extend the service interval to 16K and mounted the catalytic converter close to the engine’s oil sump, which increased the oil’s temperature. The resulting sludge plugged up the oil pump’s pickup screen and, again, led to potential engine damage.

Extended service intervals not only lead to the formation of sludge but they can also lead to excessive wear of engine components.

GM’s timing chain issues are well known, and they claim that the leading cause was extending the oil’s service life too long. GM uses an oil-life monitoring (OLM) system and they recommend following it for vehicle service (along with at least one oil change per year). But what happens if the engineers set an OLM interval that is too generous? Timing chain failures seemed to be the result. 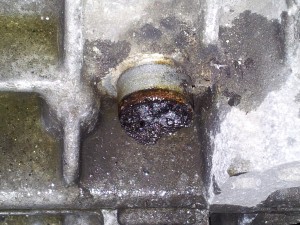 This is the PCV system on a Volvo, completely clogged with sludge.

GM’s original OLM was not based on mileage; it used engine revolutions and temperatures to calculate the time between oil changes. The original systems could allow up to 19K (under ideal conditions) before an oil change. But that changed after GM started seeing timing chain failures and issues with some of its engines. The chains were stretching and turning on the check engine light – something a customer doesn’t like to see. In the worst cases, it led to engine failure.

Seeing a dramatic increase in warranty claims, the engineers decided that the OLM system needed to be recalibrated. Now GM’s OLM incorporates mileage in its calculations, and the company has lowered the maximum distance between oil changes to increase the life of the timing chain, and lower warranty claims.

Oil consumption isn’t a common complaint, until the oil gets low enough to turn on the “Service Engine Soon” light. Modern engines have low-tension piston rings, designed to give good power with the least amount of resistance to improve fuel economy. But these rings are very susceptible to damage from overheating, poor quality fuel, cold weather starts, improper oil, and poor maintenance.

Issues with Honda’s VTEC system are well known – especially when they are low on oil. The rings are susceptible to gumming up with carbon. The result is the engine burns oil. Honda has extended the warranty on a number of models, including the 2010-11 CR-V and 2008-11 Accord with certain four-cylinder engines, and after verifying the engine has an oil consumption problem, they may change the piston rings, or even the entire engine block to rectify the problem.

Honda is also having a similar issue with rings not functioning properly due to deposits on certain 2008-10 3.5L V6 engines.

Gasoline direct injection (GDI) is a technology that is becoming the norm in our industry. It has created some concerns with deposits as well (See “Clearing the Carbon” on page 36). Some of these engines are prone to valve deposit issues but there’s another area of concern: soot.

The GDI combustion process is introducing more soot into the engine’s oil. The soot that a GDI engine creates is carbonaceous and not like regular soot created in a non-GDI engines. This has captured the attention of both car manufacturers and lubricant manufacturers.

GDI-produced soot has been found to react with certain lubricants and additive packages in a very unique way. Traditionally, soot leads to the thickening of engine oil and eventually the formation of sludge. But this soot tends to cause engine wear. The combination of combustion acids, fuel dilution from incomplete combustion and GDI soot, has been found to be a substantial reason for accelerated timing chain wear. It may not be a coincidence that GM’s 2.4 and 3.6 engines – which suffer from timing chain issues – use gasoline direct injection.

New GF-6 series lubricants are being proposed to address these issues and there’s even a new test to evaluate the ability of the oil to resist timing chain wear.

Engine issues are often blamed on oil. But this is almost always a false accusation. Design flaws and manufacturing issues aside, if the proper oil has been installed and maintained at the appropriate level, the oil itself is not going to be the problem.

With so few drivers actually checking the oil level on a regular basis, by the time the vehicle comes in for inspection, the damage has been done.

The real culprit becomes obvious to us technicians when we remove the drain plug and very little oil runs out.