Autopro of the Year award goes to two Ontario shops

It was statistically improbable, but Eldon Ingram Ltd., in Stratford, Ont., and Thomas & Kelly St-Pierre Autopro in Lancaster, Ont. tied for the top honour.

That’s how NAPA is describing the results of its Ontario Autopro of the Year competition, which saw two shops earn a distinction that has always ever gone to just one.

Through several rounds of judging, involving dozens of criteria, Eldon Ingram Ltd., in Stratford, Ont., and Thomas & Kelly St-Pierre Autopro in Lancaster, Ont. ended up with the same top score.

And rather than flip a coin, or introduce a tie-breaking round, organizers of the prestigious award decided to name both of them the Ontario Autopro of the Year.

The owners of the shops – Thomas & Kelly St. Pierre, and Rob Ingram and his father Rodger Ingram – were honoured at NAPA Ontario’s annual Autopro convention held in Collingwood, Ont. on the weekend. 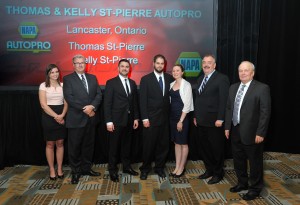 Banners co-ordinator Martyn Johns explained the selection process, which saw 11 of the province’s 163 Autopro shops earn the banner program’s stringent “gold-level” standard. Those 11 shops became the pool of candidates for the Autopro of the Year. Mystery calls were then placed to gauge their levels of commitment to 17 different business strategies deemed to be criterial to success.

“After all that, we thought we’d have a clear winner but that is not how it worked out,” Johns said. “After 17 different categories of voting, believe it or not, statistically improbable, we actually had a tie.”

He said organizers of the award didn’t want to artificially winnow that down to just one winner.

“People are recognized for their achievements, and we couldn’t take that away from them,” he said. “So for this year, we actually have two Autopros of the Year. How awesome is that!”

Thomas St-Pierre said he feels proud to have won top marks. He and his wife Kelly recently purchased the business from his father Pat. 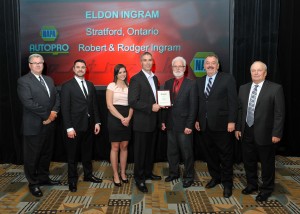 “We knew we were nominated, but we didn’t know we were one of the two winners,” he said. “I feel very proud. It’s a nice award to have.

Rob Ingram also was surprised to learn his shop had won the distinction of Autopro of the Year.

“Quite honestly I didn’t think I had a chance,” he said. “I felt very honoured to be nominated, to be part of the group, but I didn’t think we’d end up on top.”

This year’s members of the Ontario gold-level standard were: