Car giveaway is shop’s thank you to community 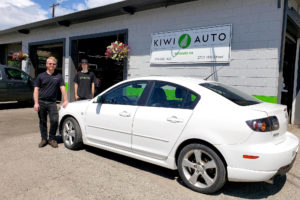 A shop owner in Vernon, B.C. plans to give away a 2006 Mazda 3 to a deserving individual in his community.

Kevin Crawford, owner of Kiwi Auto, says the donation is a token of his appreciation to the community for the support he received when he took over the four-bay shop a year and a half ago.

“The community has been really supportive of us,” he told Auto Service World. “They’ve brought us a lot of work and everyone’s been really great, so we thought it would be nice to give back a little bit, and help someone out.”

Applications to be considered for the giveaway must get to him by July 22. He acquired the Mazda 3 when a customer chose not to spend the money to fix it. Kevin saw the opportunity to turn it into a thank you gift to the community, so he purchased it from her.

With a week still to go, he has received about 70 submissions for the giveaway. He and his wife Nichoel will spend a weekend reading the letters and coming to a conclusion about who to give the car to.

“I know it will be a tough decision,” he said. “I don’t exactly know how we’ll make the decision, but we’ll figure it out. All we know is that we want to give it to someone who really needs it and is deserving of it.”

Crawford bought the business – then known as Polson Automotive – from Al Graydon, who started the business in the mid-1980s and retired in the fall of 2017. Crawford had worked there for about 11 years, after immigrating from New Zealand where he did his apprenticeship. He expects to have his Canadian citizenship by the end of the year.

Since becoming an owner of the business, he’s found himself busier than ever. Not only does he run the business and handle the front counter, but he works on most of the vehicles himself.

He says it’s still very important to him to be thorough. “I never want a car leaving that hasn’t been put right. So I just make the time to do the job properly,” he said. “People seem to be quite happy to wait a little while if they have to wait.”

The car giveaway, which he has referred to as “Christmas in July,” will take place in the next few weeks.