The 2018 Women's Leadership Conference draws an engaged audience of 200 women from aftermarket companies on both sides of the border. 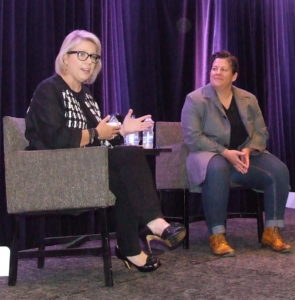 Rational discussion about North America trade may not be possible for a while, says the CEO of the Canadian-American Business Council.

Speaking at the recent 2018 Women’s Leadership Conference in Toronto, public policy analyst Maryscott Greenwood said Canada, the U.S., and Mexico had been negotiating in good faith for a year and a half, but recent tariffs and retaliations have signaled the end of rational discourse.

“That period is basically over. Now it’s political. Now it’s personal. And we’re going to fight for a while. That’s not good,” she said. “Things are going to get worse before they get better.”

She believes the unpredictable whims of U.S. president Donald Trump, as well as Congressional deadlines, and coming elections in Mexico, Canada, and the United States, are all conspiring to limit true debate on trade.

“Politics is going to get in the way of rational trade policy, and we’ll have to hang onto what we have if we can,” she said.

“What we’re hoping is that, old as NAFTA is, we can keep what we’ve got and then figure out how to modernize it. As the door closes, we may have to do it through the window. It might be through a trade and investment pact, like a TransAtlantic or TransPacific agreement that includes North America. But as someone who works with Canada-U.S. relations for a living, and who does trade policy every single day, I can tell you it is clear we’re not going to get a modernized NAFTA any time soon.”

Greenwood shared the stage with Mandy “Bear” Rennehan, the Canadian-born CEO of Freschco, a cross-border construction company. Rennehan said she’s seen first-hand how important trade is to the economies of North America.

“Whether you are a service, or in manufacturing, or in distribution, it is big,” she said. “And suddenly you have a brassy, bully kind of boot that’s walked in and said they’re not happy with the agreement. From a small-business perspective, I got a little bit afraid in the beginning, because I thought what in the hell is this lunatic going to do. I just put all this capital into growing in the U.S.”

Rennehan, who describes herself as “delightfully uncensored,” believes the loss of the North American Free Trade Agreement could destroy one of the most prosperous relationships in the history of the world.

“He [U.S. President Donald Trump] is playing with one of the most important agreements North America has ever seen,” she said. “I believe in good business. And I believe that Mexico, Canada, and the U.S. working together is a trifecta of force.”

More than 200 women from aftermarket companies in Canada and the U.S. attended the event, which featured a wide range of topics and discussions.