Think more about connecting with customers 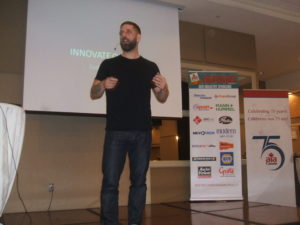 If you’re not thinking about your customers and connecting with them, failure will constantly cast a shadow over your business. That was much of the message from the keynote speaker of a recent event hosted by the Young Executive Society arm of the Automotive Industries Association of Canada.

The half-day session in late March near Toronto welcomed Justin Kingsley as its keynote speaker. He has been the brains behind a number of well-known marketing campaigns, such as the Vancouver 2010 Winter Olympics, clothing company Adidas’s sponsorship of London’s 2012 Summer Olympics and that of Canadian mixed martial artist George St. Pierre.

Telling stories isn’t easy, but that’s how you hook customers in, he said. In order to draw people into your brand, you need to connect with them. He told the story of how he had to turn Georges St. Pierre — a fighter in a violent and bloody sport — into a loveable athlete.

Instead of going on about his championships and blackbelts, Kingsley chose a different route. He marketed St. Pierre’s background story of how he was bullied as a kid. But when he got his blackbelt in karate, things changed. The bullies disappeared, and St. Pierred vowed that he was “going to fight every single bully I meet for the rest of my life.’” 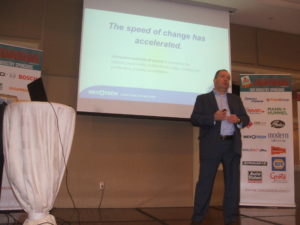 Perspectives changed and St. Pierre is one of the most beloved athletes in the world, despite taking part in a sport not short on blood.

Attendees also heard from Ezer Mevorach, the chief executive officer of parts maker Mevotech and a co-founder of YES. He titled his talk “What’s next?” because there are plenty of challenges facing the industry.

“The speed of change has accelerated, and that’s probably an understatement,” he said, noting change has “been dramatic” in the last 20 years, from “the Internet, e-commerce, industry consolidation, parts proliferation” to name a few.

He talked about the ways Mevotech had to be nimble and make tough decisions at some times to keep up with change, including selling off a chunk of the business at one point in order to chase opportunities that could be more lucrative long term. It was a risk, but a necessary one, he said.

Mevorach also discussed leadership qualities needed for successful businesses. It’s critical for success, he said, to trust and empower your staff. He noted how it was important to learn from your mistakes.

“I think that we all make mistakes, we all make wrong choices at any given point in time but learning from them is the best education we can get out of it,” he said.