Joe Ramono faces the possibility of jail time for certifying a defective 1995 Dodge Ram 2500 pickup that was involved in a deadly crash about a month later. 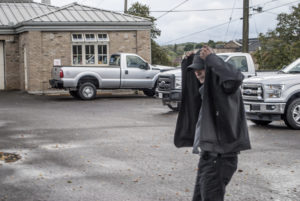 The lawyer for the Ontario technician who issued a fake safety for a defective Dodge pickup involved in a deadly crash says his client is “virtually unhirable” in the automotive aftermarket.

Lawyer Glenn Orr painted a bleak picture of his client, Joe Ramono, who was found guilty in June of issuing a forged document, and who is now awaiting sentencing.

“Mr. Ramono has suffered already as a result of this matter,” he told Ontario Superior Court Justice Stephen Bale. “He has suffered in the past, during the past five years. He is suffering in the present, and it is my submission that he is going to suffer in the future.”

Orr made a case for leniency, saying Ramono’s life has been “shattered” by the events following the 2012 crash that took the life of 27-year-old Abigail MacNaughton. He faces personal and financial challenges, and is now having extreme difficulty finding work due to his numerous encounters with the criminal court system and the Ontario’s Ministry of Transportation (MTO) over fake safeties.

Orr several times suggested safety certificates are a large part of what most repair shops do and there isn’t much call for a technician like Ramono who has been barred from doing safety inspections.

“How far does a mechanic get when a great deal of what an automotive repair shop does is precluded from him to do?” he said.

“A snowball would have a better chance in that bad place than Mr. Ramono will ever have of getting a licence to issue safety certificates again. A reasonable person looking at the situation would probably conclude that his likelihood of getting a licence in the future is … somewhat remote.”

He pleaded with the judge not to send Ramono to jail.

But assistant crown attorney Lisa Wannamaker said she did not know what kind of probation terms would be strict enough, given the importance of deterring Ramono and others from blithely certifying faulty vehicles as safe.

“It is especially important – and this is an opportunity – to send a message to other mechanics, people who I would suggest are in a position of trust in our society – entrusted with a significant responsibility to sign off on the vehicles on the road that they are safe and roadworthy,” she said.

She went over Ramono’s record, including:

* A guilty plea in 2007 of selling pre-signed safety certificates to a used-car dealership;

* A guilty plea in 2008 to charges of selling fraudulent safeties;

* A guilty plea in 2016 of several cases of selling fraudulent safeties and poor record-keeping in 2012; and

* Several letters of warning from MTO for infractions related to issuing safety certificates.

“This is a pattern for Mr. Ramono. This is how he conducts business. And to date, the fines and penalties are simply the cost of doing business,” she said. “The comments of Justice Kerr in 2007 were eerily accurate when he said, ‘Can you imagine the carnage that could have resulted from this. He might have been certifying cars to be in good mechanical condition when they were death traps.’”

Wannamaker is asking for six to nine months in jail and three years of probation during which time he must not act as a mechanic or any other post in the auto trade, nor seek a license to run an auto business. She is also asking that Ramono be forced to complete a large number of hours of community service.

Ramono’s lawyer said he has shown in the past five years that he can restrain himself from writing fake safeties, and Ramono is trying to rebuild his automotive career with a mobile repair service. But he acknowledged it has been more than challenging.

“I think it is a fair assessment – and it may come as comfort to the people on the other side – that he has fallen on evil times, on bad times,” he said. “It is very easy in this world to take the position that people are the authors of their own misfortune, and that’s often the case. But sometimes, even if they are the authors of their own misfortune, the misfortune itself is quite a cross to bear.”

Orr said if Justice Bale feels compelled to issue a jail term, he requested no more than 90 days, and that to be served on weekends.

Justice Bale is now considering the sentencing presentations and is expected to hand down his sentence on Oct. 26.


22 Comments » for Technician has ‘fallen on evil times,’ lawyer says