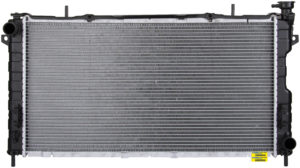 Spectra Premium has brought out 307 new parts, including 109 first-to-market SKUs across several heating and cooling, fuel and undercar and engine management product lines.

“We are thrilled with this important new parts release and with the ongoing success of our CAPA certification program,” said Eric Renaud, corporate category director – cooling systems at Spectra, adding that more part numbers will be added to the year to cover the collision radiator replacement.