It’s a way of giving back to the community, manager says.

Jeremy Zelinski has fixed plenty of cars for free this year.

No, the manager of Autologics Repair in Saskatoon hasn’t taken leave of his senses. He just wants to give something back to his community. 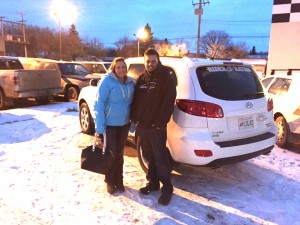 Laura Eberle was one of the winners in Autologics Repair’s “5 cars in 5 days” free repair giveaway. Her Santa Fe had needed new rear wheel bearings at a retail cost of almost $1000.

This Christmas season, he committed to fixing five cars in five days… for free. That’s in addition to the one-car-a-month program he started in September.

“This area has been pretty hard hit lately. The economy is pretty tough, and people are struggling,” Zelinski says. “It feels good to help out when someone really needs the help.”

He particularly wants to help people who are facing big challenges and running out of options.

“There’s a difference between people who are short of money and people who really need the help.”

It all started when a local radio station sales pitch made him re-evaluate his marketing spend. Devising yet another “special deal” on brake inspections or oil changes might bring in a few new customers, but it would cost him money and make people even more cynical about auto repair.

“There are a lot of promotions that really make people suspicious of our trade,” he says. “I wanted to do something that might help change the mentality about automotive repair.  I want to show people that there are shops out there that care.” 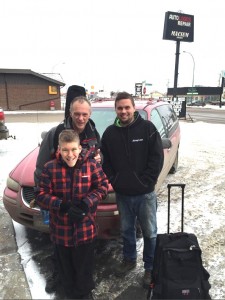 Ryan & Brian were the season’s first winners in Autologics Repair’s “5 cars in 5 days” free repair giveaway. Their rear liftgate wouldn’t open, and the driver’s outer door handle, and passenger window regulator needed replacement. It was all done for free.

So began the car-a-month program where Zelinski would choose one person to help. The repair cost was supposed to be capped at $1000 but that’s not a hard and fast rule. He’s blown past that number several times.

Zelinski, who manages the three-bay shop for owner Scott Summach, choses someone to help through the company’s Facebook page, or from current customers whose stories he’s learning.

“The advertising we’ve gotten out of it has been good, but that wasn’t the intent,” he says. “For me it’s not about the advertising it’s about spending money more wisely. Why just throw it away to the advertising companies when that thousand-dollar repair could literally change someone’s life.”

Learn about all the recipients of free repairs at the Autologics Repair Facebook site.

You can read a CBC news story about Autologics Repair HERE