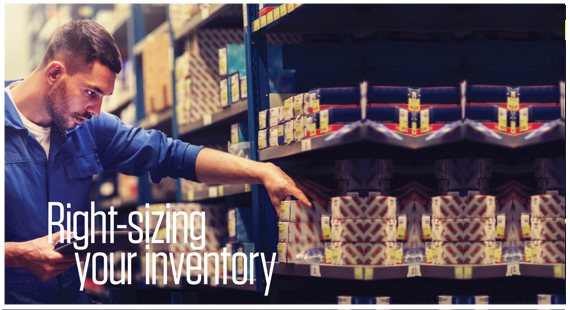 The question isn’t whether jobbers and smaller repair shops can afford the proper software to run their inventory management system. It’s whether they can afford not to.

Experts agree that there are simply too many stock keeping units (SKUs) to keep track of – some selling, some not – so the right software is an absolute necessity, whether you’re a two-person shop or a national chain with thousands of employees.

Phil Murphy, St. John’s-based vice-president of Colonial Auto Parts, a distributor with 11 locations in Newfoundland and Labrador and two in Nova Scotia, said the proliferation of parts in recent years is the biggest challenge for his company.

“It’s 10-fold compared to what it used to be and what you had to carry. A decade ago, you had one set of brake pads to fit 10 cars. Now you’ve got 10 sets of brake pads to fit one car,” he said. “Most locations carry a branded product and a private label one so you’re running two or three labels for every category you have.”

According to U.S. government figures, the average vehicle built today has about 14,000 parts while the typical car or truck on the road is 11.5 years old. In Canada the average age is considerably lower (about 9.71 years, according to the last published measurement in 2017). Nevertheless, that includes a lot of parts to keep track of. 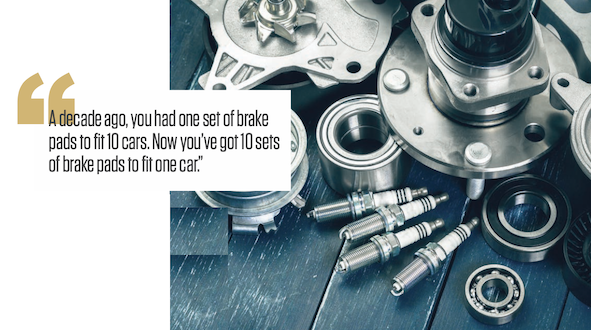 Rod Newlove, Kelowna-based president of Automotive Parts Distributors, which specializes in ACDelco parts, agrees. He said the explosion of SKUs is 90 per cent of the issue facing jobbers and smaller repair shops. Just because a new tire rod comes out doesn’t mean it should be automatically added to your inventory because you don’t know anything about its performance.

“Ten years ago, it was so much easier to manage. The big picture is managing your inventory properly to assess what you have in stock that isn’t selling and parts you should have but don’t,” he said.

Newlove recommends software that can analyze what products are being looked up in online catalogues, both regionally and nationally.

“If a widget for a 2017 Toyota gets looked up a lot, that’s a pretty good indication that there’s a problem and we should be stocking it,” he said.

“You want to make sure you have products that sell. Having products that don’t sell is a waste of money and space. If you don’t have a part, it gives the customer a reason to go somewhere else. Eventually, they’re going to forget about you.”

A lot of software programs offer a basic package that is scaleable for larger operations.

“If you decide to grow your company, the software can grow with you,” Murphy said. You don’t have to scrap the software just because you added one location. That’s why it’s important to pick the right software. You have to review everything you can review and see what fits your business and your market. Not every market is the same.”

Matt Castro, manager of the NAPA Winnipeg main counter, figures he has a virtually fool-proof method of right-sizing his inventory. NAPA works with Manitoba Public Insurance Corp., the province’s non-profit Crown Corporation that provides basic public auto insurance, to compile a database of cars and trucks registered in the area.

“We take the postal codes and we build our inventory based on that,” he said.

One of the most crucial elements that NAPA’s software tracks is lost sales. Every time a customer or potential customer calls or walks in to ask for a particular part and the shop doesn’t have it in stock, it’s entered into the system as a lost sale.

“If somebody wants a set of brake pads for a fancy Mercedes and we don’t have it, that’s a lost sale on that item. If we get a call two weeks later for the same part (and we still don’t have it), our system will order it and to put it in our inventory,” he said.

At NAPA stores attached to a warehouse, any time a requested part isn’t on the retail floor, that’s registered as a lost sale, too. It’s all done in the name of efficiency.

“We don’t want to run to the warehouse a million times a day,” he said.

Murphy agrees that any software system needs to automatically capture what you’re selling and what you’re not selling.

“It needs to be able to let you know if you’re stocking two of a particular item when you should be stocking 12. Lost sales is the most important factor to capture. That’s real-time data that you need. The lost sale is something you could have moved in your market. That’s your whole purpose of being. If you don’t have that captured, you’ll never grow,” he said.

Murphy, who is also vice-president with A.P.M. Limited, a parts distributor in New Brunswick and Nova Scotia, said inventory management software needs to be easily understood by service advisors and technicians who want to look up parts before sending in their orders.

“You need to have that functionality,” he said.

The ease with which DIY consumers can order automotive parts online is another reason why jobbers need to have effective inventory management systems. Castro said this growing trend is “scary” because consumers are able to eliminate the middle man.

“It’s cutting us out of the loop, which means places like RockAuto.com can sell parts at the wholesale price,” he said.

“That’s where we’ve got to be competitive, have options for customers and have the stock. If we don’t have it, they’ll go to Rock Auto. But if we have it now, they’ll pay a little more for the convenience. They won’t shop around as much.”

It’s also crucial that auto repair shops are seen as more convenient and providing better value than dealerships, particularly for vehicles that are no longer under warranty. Three-quarters of the auto repair market is done by smaller shops while one-quarter is done at dealerships.

Murphy agrees that online retailers are a “huge” threat. But how jobbers respond to them is far different than how they should deal with local bricks and mortar competitors. It’s critical to position yourself as a shop that can add value and convenience while keeping your customers’ vehicle in excellent condition. Consumers who order online are looking up parts and placing the orders themselves so if something goes wrong, they have a lot more to deal with than if they visited their local jobber.

“If you’re ordering online and you’ve got to return a product, you’re dealing with a company that’s far away. Cars have become much more complicated so you have to know what you’re ordering. Systems are so tied together. If you (have one incorrect part installed) that can affect other systems in your car. It’s buyer beware,” he said.

“But if you buy something from us, we look after you.”

Proper inventory management can ultimately have a significant impact on a shop’s profitability. Castro finds that money is tight for many customers so they’re not big on preventative maintenance. They’re only replacing parts when they break.

“They’re not changing a ball joint because they think it’s going to wear out in a month. They wait until the wheel is almost falling off. If we don’t have the part, they have to go somewhere else right away,” he said.