Organizers and supporters of the new “Repair It Right” program issued a rallying cry for industry unity on Tuesday night.

Repair It Right is the proposed new slogan for what was once referred to as the Right To Repair – a name that has been adopted by a number of tech industries calling for open access to repair information.

Requests for Service Information
can now be made at

with a promise of quick
response and follow-up.

Tuesday’s meeting in Mississauga was essentially a coming out party for the program, developed over the past year by the Automotive Aftermarket Retailers of Ontario (AARO) in response to what it saw as a lack of progress on the issue by the Canadian Automotive Service Information Standard (CASIS).

Since its departure from NATA, AARO has developed working ties with NASTF, and launched Repair It Right as an improved way to request blocked service information, obtain training and industry information, and gain vehicle security professional (VSP) credentials.

All that’s left, they say, is to let aftermarket professionals across the country know that it’s available to them. The industry is urged to check out the details at the AARO website.

Diane Freeman, executive director of AARO, said the evening was to get the entire industry on the same page.

“We’ve been talking to other associations and groups across the country,” she said. “We’ve invited them here to make it clear what message we need to get out to repair professionals.”

She described the event as a kind of update for the industry.

“The industry needs to know what we’ve been up to, what’s available to them, and how they can get involved. We want everyone onboard.” 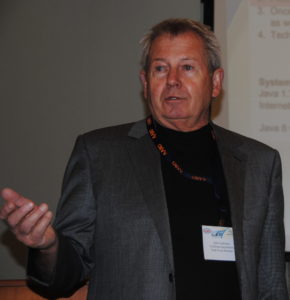 Toronto shop owner John Cochrane, who got the ball rolling last year, said it had become clear to many in the industry that the Canadian solution simply wasn’t going to provide what the aftermarket needed.

“CASIS never got fully developed,” he said. “It was controlled by a very small group of people, and it was not moving forward. This is important stuff for our industry. We need it to move forward.”

“I hope this is the embryo of something really big,” he said. “And it will be big if everyone in the industry has a same passion to find a solution. 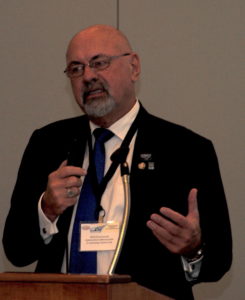 The evening started with a fiery speech from business consultant Bob Greenwood, who said the industry’s future depends on its learning how to cooperate and act in lock-step.

J.F. Champagne, president of the Automotive Industries Association of Canada, said he hasn’t given up on CASIS, but he is open to the idea of finding other ways to achieve the same solution.

“We’re still at the CASIS table,” he said. “The bottom line is we need to find the right solution that helps people fix cars. Perhaps there is some kind of partnership with NASTF that might be workable. Nothing is mutually exclusive here. We can work through CASIS, through NASTF, through AARO, through AIA. We leave our options open.”

Repair It Right is run by a Canadian task force of 16 people from four provinces, all but four of whom are licensed automotive service technicians.

Members of the Canadian task force are:

Corporate and association supporters include: