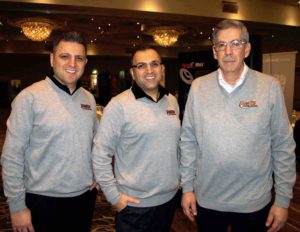 The familiar faces of Paste Auto Parts, now a NAPA corporate store. From left, Sam and Jacob Yako, and Angelo Fiorito are seen here at the company’s trade show in 2017.

Toronto jobber Paste Auto Parts has been sold to NAPA.

The deal was closed in mid-January. Paste’s three locations will become corporate stores of NAPA. Jacob Yako, who served as president of the jobber, sold the business outright but is staying on as the sales manager for the company.

He decided to sell after evaluating the future of the aftermarket business and was attracted to what NAPA was offering.

His brother Sam will also stay with the company as manager for the stores.

The deal was in the works for some time but Yako wanted to ensure that his employees and his customers would be taken care of. Yako noted that many of his customers were apprehensive about working with a big company like NAPA, fearing service and price would be different. But he’s working to make the transition easy, explaining that everything is the same, if not better.

“So far it’s been great. My customers are loving it,” he said.

Paste just celebrated its 16th anniversary, having grown to three stores over that time. The company was previously with Bestbuy Distributors.

Yako gave special thanks to the suppliers for the strong relationships developed, the customers who helped build the company and employees who dedicated their time to the business.

“At the end of the day when I sold, there was a lot of joy from customers, suppliers and my team about moving forward and working with NAPA,” he said.