Mopar awards top techs and advisors in its U.S. network 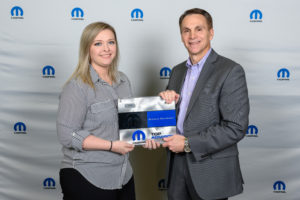 Mopar recently announced its lineup of Mopar “Top Tech” and “Top Advisor” award recipients, recognizing 100 technicians and 30 service advisors out of a pool of 35,000-plus candidates across the United States.

Award winners hail from 40 states across the country.

“When it comes to customer retention, no one is more important than our dealership technicians and service advisors,” said Steve Beahm, head of parts and service (Mopar) and passenger car brands, FCA North America. “As new automotive technology continues to develop at a fast pace, it’s critical to recruit new talent and retain top performers. The Mopar ‘Top Tech’ and ‘Top Advisor’ programs help us identify and recognize key talent, so we can take care of today’s customers while getting ready to meet the technological challenges of tomorrow.”

A group of the award winners were treated to a trip to the Metro Detroit area, with stops including a tour of FCA US LLC headquarters in Auburn Hills, Mich., a visit to the North American International Auto Show in Detroit, and an awards ceremony. 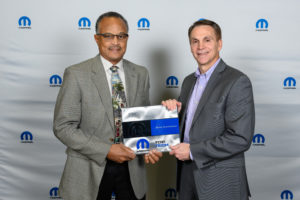 For the first time, service advisors were also included in the Metro Detroit visit. Criteria including service advocacy survey scores and survey volume returned in relation to peers were used to determine the 30 elite service advisors.

Mopar has expanded its network of FCA U.S. dealership technicians by more than 4,000 over the last four years with key recruitment tools such as the Mopar Career Automotive Program (Mopar CAP). Mopar CAP prepares students to begin their automotive technician careers upon graduation from a certified, two-year training institution, such as a university, college, community college or technical center. Currently, half of all FCA US dealership technicians are under the age of 30.

Programs such as Mopar “Top Tech” help aid in the retention of those new technicians.

Mopar (a contraction of the words MOtor and PARts) is the service, parts and customer-care brand for FCA vehicles around the globe.