Donations to community-based charities will be suggested by the company's network of transmission specialists. 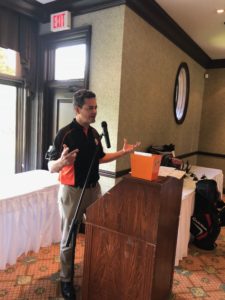 Mister Transmission (International) has launched a new charitable foundation, seeded with a $25,000 donation from head office, to support a wide variety of causes suggested by franchisees.

The Mister Transmission Charitable Foundation was announced at the company’s annual golf tournament, where a further $13,450 was raised for the new fund.

President and CEO Tony Kuczynski told the 72 golfers who attended the 30th annual event, held last week at King’s Riding Golf Club in King City, Ont., that the focus would be to support children and youth in the areas of health, hardship, education, and community initiatives.

“We’re very excited about supporting the local communities of our franchisees and the causes they feel strongly about, and getting their support for our fundraising efforts in return,” he said. “We expect to be able to raise a lot more money if our franchisees are more engaged.”

Mister Transmission and its franchise outlets across the country have long supported the Canadian Breast Cancer Foundation.

“We’ve raised a lot of money for CBCF and provided a lot of support,” Kuczynski said. “And we will continue to support them. But we also want to support some other causes that are near and dear to the hearts of our franchisees.”

The Richmond Hill, Ont.-based company has 60+ transmission shops in its national network.