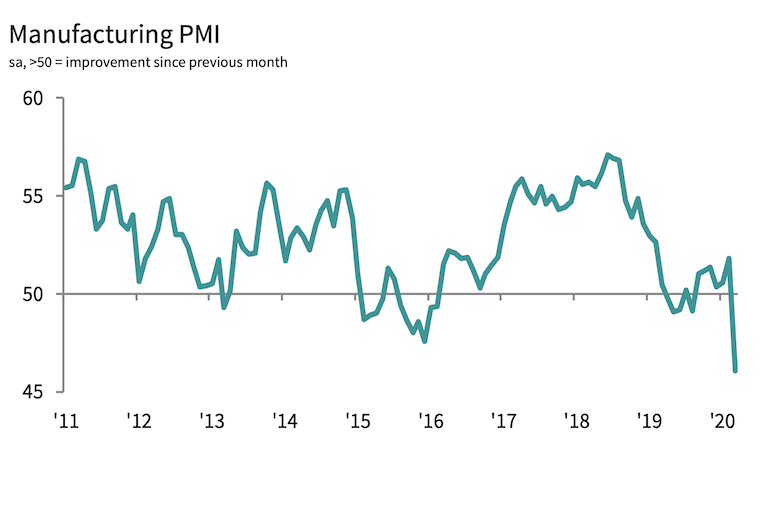 Manufacturing production in Canada fell in March at its fastest pace in almost 10 years, according to the latest data compiled by IHS Markit.

Measures to halt the spread of coronavirus disease 2019 (COVID-19) also resulted in shortages of manufacturing inputs and the steepest lengthening of suppliers’ delivery times since the survey began in October 2010.

The headline seasonally adjusted IHS Markit Canada Manufacturing Purchasing Managers’ Index (PMI) dropped from 51.8 in February to 46.1 in March, to register below the 50.0 no-change threshold for the first time since August 2019. Moreover, the latest reading signalled the sharpest downturn in overall manufacturing conditions in nine-and- a-half years of data collection.

Mirroring the trend for output levels, latest data also indicated the fastest reduction in new business volumes since the survey began in October 2010. Where growth was reported, this was mainly among food producers and those in the pharmaceuticals sector. Meanwhile, some manufacturers noted that the slump in oil prices had been a key factor behind lower customer demand in March.

Lower export sales were almost exclusively attributed to business shutdowns and closed borders in response to the global public health emergency. The rate of decline in new orders from abroad was the fastest since the survey began.

At the same time, production stoppages and supply chain bottlenecks across Asia and Europe were often cited as contributing to longer shipping times in March. The index measuring suppliers’ delivery times dropped to a record- low of 34.6, down from 45.3 in February. Any figure below the 50.0 no-change mark indicates longer lead-times for the receipt of manufacturing inputs.

Manufacturing companies responded to shrinking demand and reduced production schedules by streamlining their inventories and cutting employment numbers in March. The latest decline in staffing levels was the fastest since the survey began, slightly exceeding the previous record seen in December 2015. Business expectations for the year ahead also worsened to a considerable degree and hit a survey- record low.