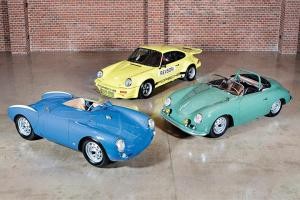 Comedian and well-known Porsche fanatic Jerry Seinfeld gave the classic car world a shock when Gooding & Company announced it would auction off a few rare cars from Seinfeld’s extensive Porsche collection. Now, however, the number has swelled considerably — from three to 18 cars in total — and they’re not your average vintage Porsches.

Auction estimates haven’t been announced for the entire collection, but for reference, the initial three cars of the collection were previously estimated to bring at least eight million dollars. This is shaping up to be one for the history books.

All told, the full list includes the following, in chronological order:

It’s hard to pick a top seller from the list, however the rare 550 Spyders are heavily steeped in history and Seinfeld’s model is estimated to bring between five and six million dollars on its own.

So why is Jerry Seinfeld selling? According to the comedian, it’s time for some other enthusiasts to enjoy part of the collection.

“I’ve loved being entrusted with their care, and I’m proud of the level to which we have brought each and every one of these wonderful machines,” Seinfeld said. “The reason I wanted to bid these cars farewell in this way is really just to see the look of excitement on the faces of the next owners who I know will be out of their minds with joy that they are going to get to experience them.”