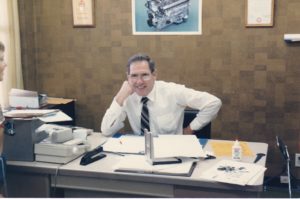 The man who set the tone of the aftermarket – especially out west – has died.

Daniel Scrivens died suddenly at the age of 94 on Jan. 14 in Calgary but left behind a legacy that few, if anyone, can match. He had a long and storied career in the Canadian automotive aftermarket in Western Canada. After he was trained as a mechanic while serving as a soldier in the British army, he used his knowledge to work in a number of garages in his early career. Scrivens eventually owned a Gulf Oil gas station with three service bays.

He got into the jobber side of things after his service station lease expired. In 1975 with his wife Barbara, they opened Automotive Village Parts. Scrivens knew what customers wanted and was at the forefront of defining what it meant to buy auto parts.

“The mid-70s was the birth of automotive retail in Western Canada,” said long-time colleague and friend Sean Corcelli, who retired from Uni-Select as its regional vice president of the Prairies division in 2017.

Scrivens pushed for bigger, brighter and more colourful showrooms. He was keen on merchandising and committed to inventory.

“Customer service was his focus. He lived and died to make sure the customer was looked after properly and politely. He demanded that his staff were clean, tidy, professional and wore uniformed shirts,” said Scrivens’ daughter, Janice, the company’s retail manager and first employee. 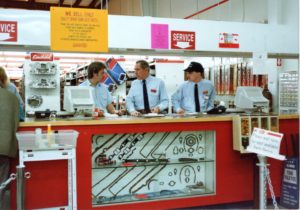 Daniel Scrivens, centre, behind the counter following the opening of a new location of his then-Bumper to Bumper Forest Lawn store in 1991.

“We were 100 per cent retail in 1975. He made sure everything on the retail floor was dusted, merchandise priced, customers were greeted the second they hit the door, asked if they needed help and left alone if they wanted to be. If you couldn’t do that for him, then you didn’t work for him.”

His made sure his business went hard after the do-it-yourselfer after noticing that traditional jobbers were ignoring the market.

“Do it yourself – a phenomenon sweeping the aftermarket,” Corcelli remembered of that era.

A couple of years later, the store adopted the Bumper to Bumper name under Acklands and grew throughout Southern Alberta, with family playing integral roles in helping the growth of the business.

“He put us all to work and we had to work harder than any staff member because we were the example,” Janice said.

After Acklands moved its distribution centre to Edmonton, Scrivens opened a warehouse, Central Auto Parts, in 1989 after in order to feed his stores directly and quicker, rather than waiting for parts to travel down Highway 2 overnight. The company built a new three-floor, 64,000 sq-ft facility in 1999.

“[It] was opened to house the automotive inventory that Dan demanded to be on hand to service their stores and loyal customers,” Corcelli said.

“His philosophy was, ‘I want the parts people want and I want them in stock.’ Inventory was absolutely his passion,” Janice said. 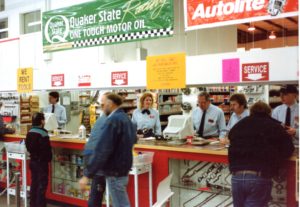 Inside the Forest Lawn store in 1991.

In 1996, Scrivens left Bumper to Bumper and became a shareholder in the Aftermarket Auto Parts Alliance. He changed the name of his stores to Auto Value, of which there are 14 locations today.

Scrivens was remembered as a kind, honest and fair person who loved people and made it his business to go out of his way to speak with customers, friends, employees and even strangers. It was a trait that continued into retirement. Janice told the story of how her father visited the distribution centre and one of the stores on Christmas Eve and spoke to each employee and shook their hand.

“He didn’t play favourites. He spoke to everybody – everybody,” she said.

What also set Scrivens apart was his ability to be ahead of the curve.

“Always with a keen eye for product and merchandisers, Dan was occasionally frustrated awaiting the industry to ‘catch up’ to him,” Corcelli said.

“Retail was completely foreign at that time. He kind of dragged everyone along,” Janice said, recalling how her father would buy whatever he could to fill up retail space in his store. “He would buy anything anyone brought his way, so we did virtually have everything.”

Scrivens even had women working in his stores, “long before it was fashionable or legislated,” Janice said. “If you could do the job, you kept the job. He had many, many women working in the parts stores, which is normal today but very unusual in the late ’70s early ’80s.”

Scrivens also spent time as a member of the Automotive Industries Association of Canada and the local Rotary Club.

The industry is also remembering him as a driving force behind establishing the presence of the aftermarket in Western Canada.

“Dan was a brilliant, demanding, fair entrepreneur, always incentivizing those around him to be best. His sense of humour was contagious,” Corcelli said. “His family epitomize his spirit and pursuit of excellence. He was indeed a hero of our game.”

Scrivens had six children, 16 grandchildren and six great grandkids. A celebration of life was held Jan. 20 with 300 people in attendance.

Have a memory of Dan Scrivens that you’d like to share? Let us know in the comments below.


4 Comments » for ‘Hero of our game’: Dan Scrivens dies suddenly