From the Magazine: Finding Success

For our June issue, we surveyed jobbers to get their views on how shops run their business. They see opportunities for success, starting with building knowledge 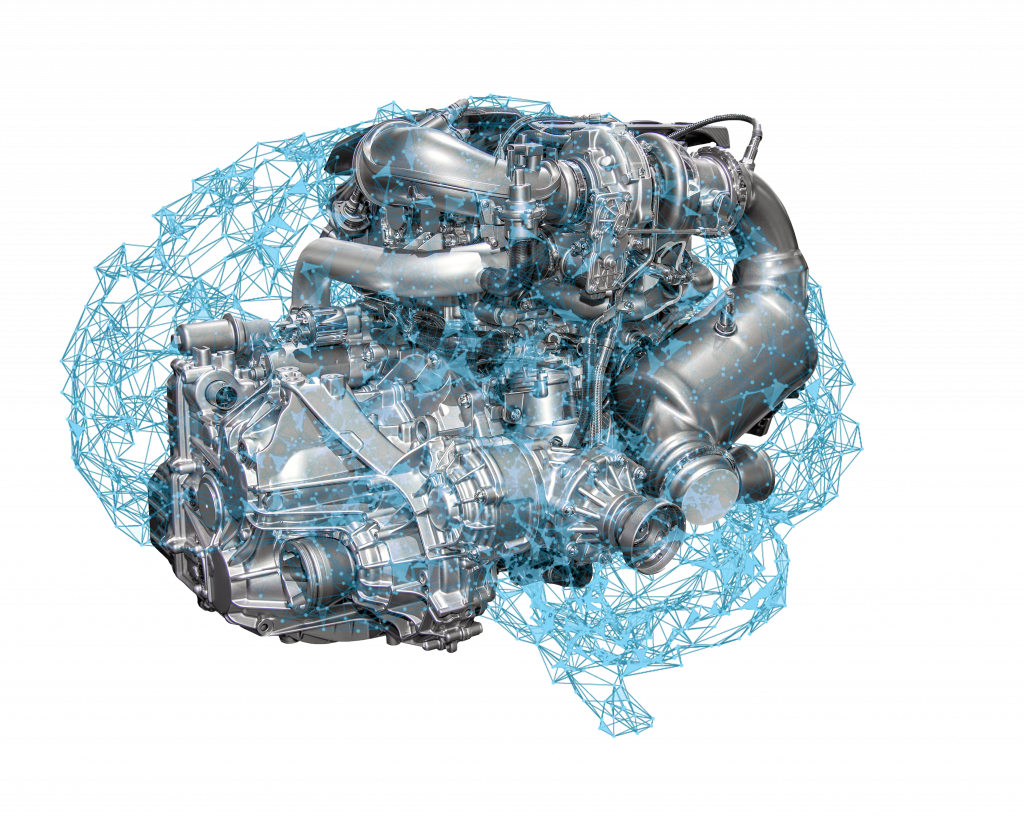 JOBBERS ARE VESTED in the success of your business. An automotive repair and service shop that sees great business results is great news for the jobber – your success is their success.

But there are gaps. Jobbers have concerns about how some shops run their business. We surveyed jobbers in Canada about business practices among their shop customers, as well as asked them about what they’re doing to serve you better. Questions in the Annual Jobber Survey were created with help from shop owners so that we could get answers to questions on your minds.

Looking at the results, the general consensus is that while there are good shops out there that excel — for a variety of reasons — there are just as many and maybe more that are not doing the things necessary to breed success.

One of the main issues is with some shops’ propensity to ask their jobber for cheap automotive parts. Nearly a third (31 per cent) of jobbers CARS surveyed picked that as their top issue. Cheap parts will fail quicker but are an attractive option for consumers who want to spend as little as possible to have their vehicle repaired or maintained.

When given the opportunity to comment, one respondent noted this behaviour as repetitive before shops finally learn their lesson.

“I think there is pressure from the customer sometimes for a race to the bottom, and I’ve had customers who purchase two to three used parts or cheaper parts before finally buying a higher quality one from us quite regularly,” they said.

Meanwhile, another pointed to misguided thinking and a lack of knowledge about product markups.

“Some focus on the list price and/or the markup between their cost and list while they should be focused on their cost and how to properly mark up,” the respondent said. “Many still think jobbers are selling DIY at list price and don’t try to justify to their customers why the price of parts are higher than at a jobber. The old ‘try taking a steak to the restaurant’ story must be told.” 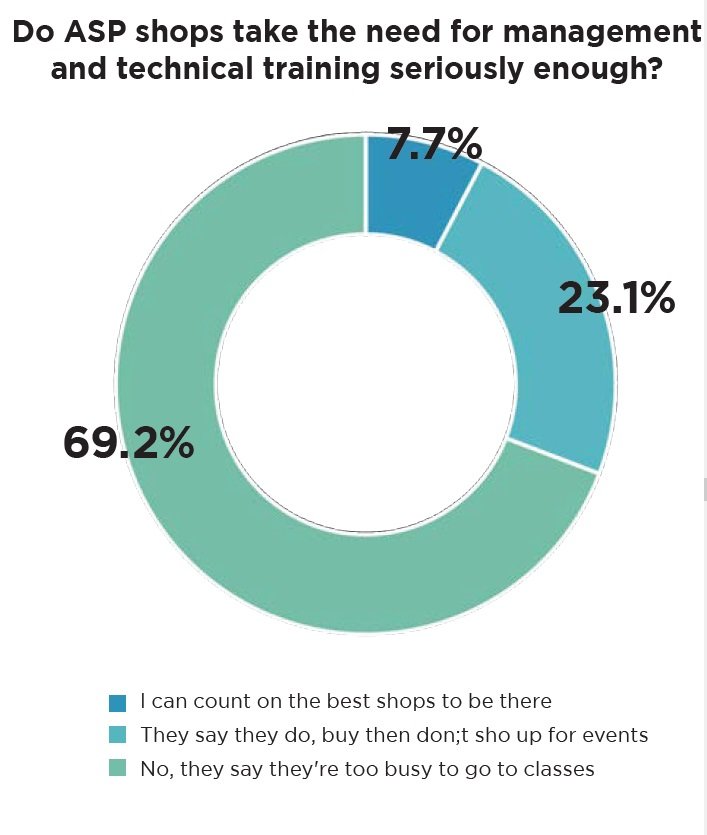 To underscore that point, when asked if automotive service providers take management training seriously enough, an overwhelming majority of jobbers said no. According to our survey, 69 per cent reported that the excuse they hear is that their shop customers are too busy. Another 23 per cent said shops say they’re serious but they don’t show up. In all, that’s 92 per cent of jobbers reporting that shops don’t take training seriously.

The remaining 8 per cent said they are only able to count on their best shops showing up.

“This problem is here for a long time. There are many issues to address. Workforce is hurting,” said one respondent.

“Training is a good thing and we may have a bit of a problem in our remote area holding live sessions. But shops should be more proactive with the online training if they are not willing to travel. Perhaps set aside an hour or two per week — paid — to take a course,” suggested another.

Others noted that some shops view it as an expense rather than an investment.

“Shop does not pay for further education. Cheaper to get it on YouTube,” one answer read.

“Thinking training costs you money — but knowledge makes you money,” advised a respondent.

Another area of concern that jobbers highlighted was a lack of proper business management procedures. As mentioned earlier, the success of a jobber depends on the success of its shop customers. But jobbers are concerned — and, anecdotally, have been for quite some time — about the lack of business preparation and training among shop owners. This extends to ensuring proper training for technicians, an important aspect as changes in vehicle technology rapidly accelerates.

“Most techs that became owners weren’t prepared for the admin and accounting side, so they are not in tune with their numbers,” one jobber noted as a concern.

“They need to ensure their training and experience is current and work on proper training. The better shops excel in most areas,” echoed another.

One observed that competition could drive poor judgment when it comes to business practices. “[Shops are] too busy trying to undercut other shops’ door rates and making mistakes in the process.”

A jobber observed an issue around assuming the customer can’t afford to pay for repairs or that they won’t want to. “Stop selling on price. Don’t judge the customer.”

The last comment was a point raised by Clint White, a service advisor coach and shop consultant with CWI, at the recent Midwest Auto Care Alliance’s Vision Hi-Tech Training & Expo in Kansas City. Too often, he said, service advisors will feel bad about how much a repair will cost or will speak with a wishy-washy tone to the customer about how much they will be charged.

A lack of authority in the delivery of the sale will only undermine shops, he advised. The customer made a conscious decision to bring their vehicle to you. They know it will cost money to fix it. So don’t act like you’re giving them bad news — sell the job, he said.

“They know their car needs work,” White said. “Speak with confidence and assume it.” 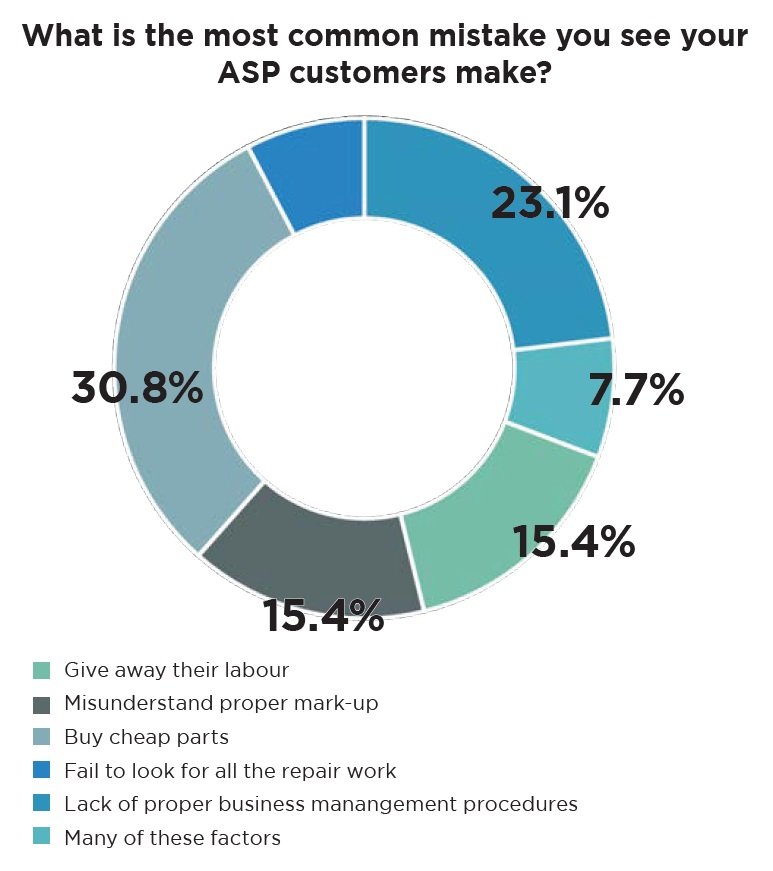 A pair of topics on the mind of some shop owners we asked as we curated questions for this survey were around delivery and returns.

While more than half (54 per cent) of jobber respondents said they were looking at new systems to make it a more efficient process, a number of them highlighted that this was an area that has led to strained relationships with some shop customers.

While non-payment appeared to be the most common reason for terminating a relationship, issues with returns — and, relatedly, warranty claims — caused relationships to become so strained that jobbers have ended relationships with shops in some cases.

“I would say dishonesty when it comes to warranty or consistent mis-installation of parts, etc., the quality of work affecting their returns, etc.,” one jobber wrote.

Several others simply noted too many returns and warranty claims as drivers of a broken relationship.

When it comes to delivery, shops commented that they would like to see jobbers provide faster delivery, a better schedule or priority in exchange for their loyalty. However, a few jobbers pointed out it’s not that easy.

“Customers don’t appreciate the cost and challenges of delivery and the costs,” one responded.

Indeed, agreed another. The industry of aftermarket repair isn’t one where there’s much predictability.

“We would love to get the shops on a schedule, but due to the nature of the repair industry, I cannot see that happening as it is hard to predict what you are going to find when taking the wheels off or opening the hood,” they pointed out.

The same respondent also noted the fact that jobbers not only offer free delivery, but get products to the shop as soon as possible. In what other industry do customers get free and relatively immediate delivery?

“Shops need to understand how much this costs a store and try to be a bit more prepared when doing repairs and not order one part at a time,” they said. “Also be a little more patient, sometimes it may take more than 15 minutes to process the call/invoice, pick the goods and deliver. We have more than one customer to deal with and try to make each run as efficient as possible, especially with fuel prices as there are currently. Remember, no charge for delivery within an hour — anybody else do that? Furniture, pizza, groceries?”

We asked jobbers about future challenges. While just about 70 per cent of respondents said parts availability/supply chain was their biggest problem right now, 31 per cent expect that to be a problem in the years ahead.

Making up the difference between now and the future is vehicle technology — while none listed it as an issue for them today, 31 per cent said it would be the biggest challenge or have the biggest impact on their business down the road.

Nearly four in 10 (38.5 per cent) are adding electric and hybrid parts to their inventory.

“Demand is currently low but it has to increase as the sales of those vehicles go up,” noted one jobber.

“We have added some hybrid parts but have very low sales,” observed another.

Which makes sense. Alternative-power vehicles make up a small percentage of vehicles in operation in Canada — 5.2 of all new vehicle registrations in Canada in 2021 were electric or hybrid, according to Statistics Canada. And there are few hitting aftermarket shops. That seems to be why the remaining 61.5 per cent of jobbers are not stocking parts for those vehicles.

“I believe it is five to 10 years away. Electric/ hybrids owners are not spending money,” observed one respondent.

“The demand is not here yet not for at least three to five years,” said another.

“Not too great yet but it is coming,” noted a jobber.

We also asked jobbers to deliver one message to help you better understand them.

Consider their perspective, consider costs and be understanding, most of them said.

“We need to make money just like they do — [by the way] I tell them that every day,” said a jobber.

“We are doing our very best and yes, we do sometimes make a mistake and it affects everyone, but we are usually very busy with a lot going on behind the scenes with more than one customer that is not seen by most,” said one respondent.

“With the amounts of parts required, we depend on warehouse service a great deal to get customers their parts. Sometimes that can be difficult,” explained another.

This feature originally appeared in the June 2022 issue of CARS magazine.