Racing to the top 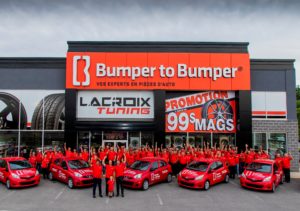 Pieces d’auto Lacroix – Lacroix Auto Parts is the 2018 Jobber of the Year. The team is pictured in front of the Terrebonne, Que. location.

If you’re not trying to be the best, what’s the point?

That’s the attitude Dany and Kevin Lacroix take into work – and outside of it – every day. The drive to be at the top of their game and make their business as successful as possible is why they’re the 2018 Jobber of the Year.

The brothers own Pieces d’auto Lacroix – Lacroix Auto Parts, operating under the Bumper to Bumper banner. They have ﬁve locations on the north shore of Montreal – Boisbriand, St-Eustache, Terrebonne, Mirabel and Laval.

Since taking over from their father two years ago, they’ve implemented sweeping changes to the way the business operates. They have revamped how orders are placed, implemented technology to make deliveries better and opened a ﬁfth location in their relatively short time at the helm.

“We find ways to challenge ourselves. We’re a family that has always been taking on a challenge,” Kevin said.

The Lacroix family has a history of striving to be No. 1. Kevin and Dany’s father, Sylvain, who started the business, was a snowmobile racer who won a world championship in the early 1990s. Kevin is a racer in the NASCAR Pinty’s series. Dany has been involved in the business since he was a teen and has always looked for ways to make it the best in its market.

“Honestly, all these improvements have helped us,” said Francis Vincent, co-owner of Les Alignements Joly in Laval.

“At the call centre, we talk to the best parts advisers. In addition, their distribution centre is directly in Boisbriand. There is a lot of choice, a lot of variety and a lot of service, especially when it comes to technical assistance.” 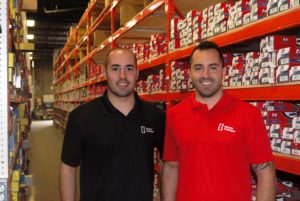 From left, Kevin and Dany Lacroix in the warehouse of their Boisbriand, Que. location.

“They’re modernizing the way of doing business,” he added. “Directly from my heart: They’re honest, transparent and very loyal to their supplier.”

Dany and Kevin like to find problems in their business and challenge themselves to find solutions. Take for example, the issue of staff-shortages. Employees are being pulled in so many different directions, causing additional stress.

What’s the solution? A call centre, one central place for all phone calls to go and have a team of experts on hand who are ready to answer any questions customers have. Now when a shop calls, they’re not talking to someone in a speciﬁc store, they’re talking to an expert, ready to answer all their questions.

Counter staff can focus on the customers in the store while a different team is dedicated to the phones – one doesn’t need to worry about the other. With pressure alleviated, the brothers were able to take a step back and focus on the business, rather than working in it.

“The stress level has diminished a lot, so that was a very good move for us. It made us able to focus on the future of the company,” Kevin said, adding that Lacroix has grown 12 per cent in each of the last two years. “Proﬁtability is increasing every year because sales went up.”

Customers complained about delivery times. Another challenge. So the brother moved to an electronic system to track deliveries and ensure their operations ran smoothly.

But that wasn’t enough. Noticing a hole in their distribution map, the brothers set their sights on a fifth location – but one that was different from the rest. The newest location in Boisbriand is not open to customers, acting as a warehouse with so much more space that they can carry more products and more lines to better serve customers.

The brothers took over the business from their father, Sylvain, who started the business in the late 1970s. He couldn’t be prouder.

“All the ideas that they’ve come up with have been very good ones to bring the business to higher and higher levels,” he said. “The company was built for them and they’re going to make it even better.”