What gasket would work best for a leak-prone 1974 Bronco? Time to get back to basics! By Thomas Zimmermann 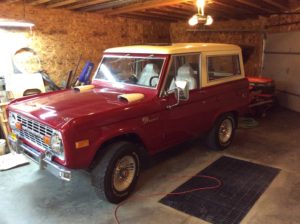 As we all know, every automotive technician is full of opinions. And often they are strongly held. But when it comes to automotive repair, eventually opinion must give way to fact.

That lesson became clear to me during a recent gasket conundrum when a very tricky sealing problem brought a multitude of opinions into play. Eventually, we found that the best way to proceed was to set preferences aside, go back to basics, and simply look at the facts.

The job involved a 1974 Bronco, which the original owner had decided to restore. It had been tinkered with over a period of 17 years, disassembled and reassembled more than once, and moved cross-country several times in various states of completeness.

By the time I was brought in, it was just a metal shell and seven Rubbermaid bins full of parts. To add to the challenge, not all of the parts in the bin belonged to the Bronco. Sprinkled in the mix were bits of a Porsche race car, parts from a family station wagon, and remnants from a few small engines.

Needless to say, it was a challenge! 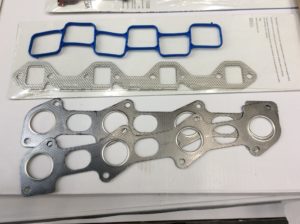 After a few months of weekend work piecing things together, all the doors were working properly, the windows were in, and the engine was back in its cradle.

It fell to me to bolt up brand new exhaust headers, using brand new fasteners. The tech who had built the engine insisted on using thick copper performance gaskets. In his opinion, they would seal better. I went along with that because I didn’t have strong feelings about using one type of gasket over another. The copper gaskets had already been purchased, so off I went.

I installed the gaskets, torquing the header bolts in the correct order and to the specified torque value. All seemed to be tight.

When we had connected the battery and made sure there weren’t any electrical meltdowns, the engine was flashed up for initial run in.

With the engine running, I slowly made my way around the open engine bay, looking for leaks of any kind. Passing by the header on the left side, I noticed what I thought was dark sooty-like material near the rear flanges. So soon? It was not a tragedy, but it wasn’t good either.

There was a similar issue on the passenger side. A little exhaust leak wasn’t going to cause problems for run-in, but would definitely have to be addressed.

That’s when the opinions started flying.

“Well, maybe they need to be retorqued after cool down,” was one suggestion. Yeah. We tried that, and it didn’t help.

“Maybe the copper has annealed and just needs to be heated?” was another, but that wasn’t the answer either.

After dispensing with the notion of eliminating the gasket altogether, we were left with three options.

Copper gaskets are generally around 0.043” thick and are purported to provide a leak-proof seal even on irregular surfaces. Because they’re a solid metal, this type of gasket won’t shrink. They also tend to wear quite well, aiding in the prevention of premature exhaust leaks due to loose header bolts. Some copper gaskets are embossed, which utilizes a slight depression surrounding the mating holes that crush slightly to improve the seal. Others are flat, typically for use in drag race engines for better pressure retention between the cylinder head and header.

When these first appeared on Asian import vehicles in the late 90s and early 2000s, technicians wondered if multi-layer steel (MLS) gaskets could hold a seal in critical spots for extended times. But even in demanding environments like cylinder heads and manifolds, they work just fine… and here’s why.

Multi-layer gaskets can accommodate different expansion and contraction rates. This is particularly important where there is a steel block and aluminum head – as is quite common in today’s smaller, hotter engines that offer more power per cylinder. MLS allows movement between mating parts while continuing to provide the necessary sealing.

Typically made of stainless steel with a rubberized coating between each layer, MLS gaskets can have as few as two layers, and as many as five layers for passenger car and light truck applications. For heavy duty applications, it could go as high as seven layers. It all depends on the sealing demands and the likely movement between parts.

They’re can be made of plant material (cellulose), sponge rubber, gum rubber, nitrile, graphite or a synthetic fluoropolymer of tetrafluoroethylene referred to as PTFE (or more commonly known by the brand name Teflon). The list is quite extensive, addressing many different sealing demands.

For a long time, another fiber material – asbestos – was used extensively for gaskets because it offered excellent heat resistance, sealing, and insulating. However, the associated threat of asbestosis (a terrible lung disease) has reduced its use to almost nil.

It was, in fact, a high-density fiber gasket with a steel core that is typically used for this particular exhaust system. The fiber promised to crush well, and take up some of the irregularities and warpage in mating surfaces to provide a good seal.

So which one was right for the Bronco? Well, at first none of them. No matter what we installed, the rear two flanges on both sides would leak.

That’s when we decided to get back to basics.

We removed the headers completely and inspected them carefully. We found that they’d been manufactured poorly, with the rear two flanges nowhere near as flat and square as they should be. Clearly they should have been checked with a straight edge before installation!

The words of my former master mechanic’s voice rang in my ears: make sure you double check parts before you install them!

With a little heat, a metal file, and a lot of elbow grease on the affected flanges, we managed to straighten them out. Eventually we had four happy, flat holes per side. After checking them for flatness, we wrestled the headers back into position.

Ultimately, the fiber gaskets we used sealed all the holes just fine, but in retrospect I’m convinced that if we’d checked the headers for warpage or damage earlier, an MLS gasket or the copper one we started with would have worked just as well.

Whenever you’re faced with many varying opinions, remember that those opinions can lead you astray. Doing a little bit of research and discovering the facts are your best resource.

And, as a great rule of thumb, when all else fails, go back to the basics, check everything twice, and rely on what you can verify!

Thomas Zimmermann is an automotive and heavy duty technician based in Cochrane, Alta. You can reach him at ThomasZimmermann@shaw.ca.