Electric power is a game changer in the heavy duty market

Part 2 of 7 in an exclusive new series.

It wasn’t that long ago that the idea of electric powered long-haul trucks was laughable. Times have changed!

Not too long ago, the conventional wisdom was that long haul trucking was not going to be impacted much by the coming vehicle electrification. This skepticism was centred on the fact that battery packs simply couldn’t provide anywhere near the range expected of a long haul semi, nor the fast refueling times associated with diesel. In fact, the very well-respected analysts at McKinsey & Company called for an EV adoption of under 5% by 2040 for Class 8 trucks.

In November 2017, however, Tesla completely blew that notion out the water when it unveiled the Tesla Semi. The specs were revolutionary: 0-100km-h in 20 seconds when fully laden at 80,000 lb (as opposed to a couple minutes under conventional power), 100km-h up a 5% grade (as opposed to 60 km-h), and a startling 0-100km-h in 5 seconds when not towing. That last figure blows away all but the sexiest of sports cars and puts into sharp perspective exactly how much ‘grunt’ this thing has! What’s more, the biggest battery option has a range of over 800 km before requiring a charge – a use case that is suitable for many, if not most types of long haul trucking duties.

The real ace in the hole, though, is the huge savings in energy costs and projected maintenance – less than half of a typical large diesel Class 8 semi. Here’s a quote from Tesla’s website: “Electric energy costs are half those of diesel. With fewer systems to maintain, the Tesla Semi provides $200,000+ in fuel savings and a two-year payback period.”

That’s going to make every fleet operator drool with desire.

Quite shockingly, when asked how many he expected to sell, Tesla’s CEO, Elon Musk estimated around 100,000 units by 2022, which would represent close to 20% market share if all those units were sold in North America. This would be higher than the current market share for industry giants like Paccar (Kenworth), Volvo, and Navistar (International). Sure, Musk is known for over-promising against his time line. But even if only half were realized, this would be a massive achievement.

Even more fascinating is the proposed Tesla “Megacharger” that goes with the Semi, allowing it to accept an 80% charge in just 30 minutes, at a charging rate of around 1.6MW. That’s enough to power for 1,600 homes!

But this raises a bunch of questions. How will electricity grids deal with demand loads for a single truck, let alone thousands? What sort of charger can handle such a load? Will my hydro bills rocket up faster than a Tesla roadster launched into orbit? All good questions, and there has yet to be a clear picture emerge.

What is known is that large battery stations, just like those installed by Tesla in California and in Jamestown, South Australia; provide some of the answers. The large battery stations do one thing really well. They balance grid load from unexpected changes in demand and supply. For a Tesla Semi, or any other heavy duty electric vehicle, it will be able to provide the type of demand charging required, without significantly impacting the grid.

These battery packs can also be used in a micro-grid system. For instance, a large warehouse may have a large solar panel array and together with grid back up, it can feed a large battery pack that a truck can be quickly charged from as it pulls in to unload or reload. Such a system would effectively isolate energy variables that quickly eat into the operating profit of freight companies today.

I hear you saying this is all fascinating, but what has this got to do with the aftermarket?

Simply this: Heavy trucks and buses are beginning to electrify quickly. And they require less than half the maintenance of their diesel equivalent, as well as having only a small percentage of potentially wearable parts compared to an ICE vehicle. And vehicle maintenance and repair is why most of your businesses exist.

It’s quite true that the fleet will take a while to turn over, but it’s far from inaccurate to say new heavy duty sales may be as high as 50% EVs by 2040, about which time the fleet will be at least 20% electric. 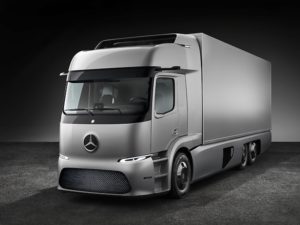 So who else is electrifying? Daimler has shown multiple concepts and its e-Canter and medium duty EV truck is just about to enter production. Cummins has shown its prototype medium duty semi. And Volvo is close to releasing an EV model. On the bus side, Volvo has had a model available for a while and Proterra, the U.S.-based bus company stacked with ex Tesla execs, has overflowing orders for their EV buses as transit authorities move towards low or no emission vehicles. The other heavy hitter is the Chinese manufacturer BYD which already sells hundreds of thousands of heavy duty vehicles in China every year, and is starting to make in roads into the North American market.

Our forecast is that battery electric will eventually become the dominant energy for heavy duty transportation moving forward. The savings in energy, maintenance and downtime reduction for operators will likely prove to be knock out blows for ICE heavy duty vehicles. There will be some exceptions, mostly surrounding remoteness to electric infrastructure, and these will particularly occur in industries like shipping, mining, aeronautical and long distance rail. These industries in particular will likely be fossil fuel focussed for a while to come, but who knows, maybe they too will have their Tesla Semi equivalent up end their sectors in the not too distance future.

In the meantime, the automotive aftermarket needs to keep a very watchful eye on the potential changes affecting heavy duty. There’s going to be some pivots required for many businesses, and it’s the ones who stay alert that will be successful in the long term future.